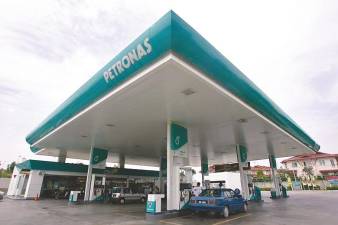 PETALING JAYA: CGS-CIMB Research has cut Petronas Dagangan Bhd’s (PDB) FY20 core net profit forecast by 17% as a result of the extension of the movement control order (MCO) by two weeks to April 14.

“Consequently, our dividend per share assumption for FY20 has been cut from 54 sen to 44 sen (unchanged 80% payout assump-tion),” the research house said in a note.

The MCO has led to closure of business, employees working from home, interstate travel being curtailed as well as a prohibition on crossing the borders by Malaysians and foreigners.

“All these measures are having a devast-ating impact on demand for transportation fuels, including motor gasoline (mogas) and aviation jet fuel,” it said in a report.

CGS-CIMB also noted that the oil price rout driven by the price war between Saudi Arabia and Russia will have a negative impact on PDB as the lagged inventory losses may be sharper than expected in 1Q because Brent crude price has fallen to only US$ 26/bbl, from US$ 35/bbl on March 12.

“In addition, we believe that Petronas is reviewing its upstream capex spending and any cuts will result in lower diesel sales to the upstream sector.”

The research house said the closure of restaurants across the country has led to a plunge in sales of liquefied petroleum gas (LPG) cooking gas tanks, although this may be partially offset by higher sales of LPG tanks to the household sector.

PDB foresees the sales of jet fuel and sales of LPG tanks to commercial restaurants falling 20% in FY20.

“Meanwhile, retail volumes (mainly mogas) are expected to fall 7.5%, and with LPG volumes (both retail and commercial LPG) forecast to decline 9%.”

Despite an earnings forecast downgrade,

CGS-CIMB reiterated its “add” call on PDB as lagged inventory losses should normalise or even reverse in future period while expecting volumes to recover once the Covid-19 outbreak is curtailed.

The research house said the rerating catalysts for PDB include a potential strong rebound in second-quarter results from the low in the first quarter.

“PDB earns a fixed margin per litre of sales under the Automatic Pricing Mechanism (APM). Despite this, quarterly retail earnings fluctuate because of lagged inventory losses and maintenance cost variations.

“Hence, assuming that oil prices stabilise in Q2, PDB’s retail earnings will snap back to the fixed APM margins, which may be a sharp recovery,” CGS-CIMB added.