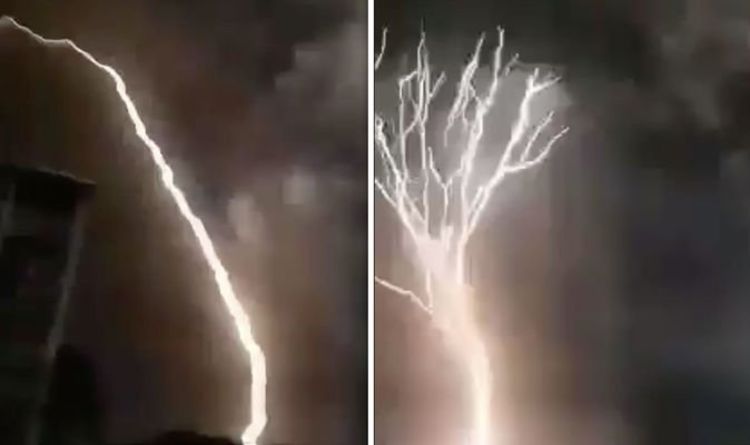 Videos of the terrifying ongoing volcano eruption have emerged on social media, with plenty of users urging residents to stay safe. The Department of Science and Technology of the Republic of the Philippines released a statement at 7.30pm local time to announce the Alert Level for the volcano was being upped from level 3 to level 4. The statement read: “As of 5.30 pm PST eruptive activity at Taal Volcano main Crater intensified as continuous eruption generated a tall 10-15 kilometer steam-laded tephra column with frequent volcanic lightning that rained wet ashfall on the general north as far as Quezon City.

“Volcanic tremor was recorded continuously since 11.00 am and two volcanic earthquakes of magnitudes M2.5 and M3.9 were felt at Intensity III in Tagaytay City and Alitagtag, Batangas, were recorded at 6.15 and 6:22pm PST, respectively.

“In view of the above, DOST-PHIVOLCS is now raising the alert status of Taal from Alert Level 3 to Alert Level 4.

“This means that hazardous explosive eruption is possible within hours to days.”

The volcano, south of the Philippine capital Manila spewed a giant ash plume accompanied by rumbling sounds and tremors on Sunday, prompting authorities to raise the alert level and order the evacuation of about 8,000 residents.

The Philippine Institute of Volcanology and Seismology also raised the alert level at the rumbling Taal volcano indicating “magmatic unrest” that could lead to a “hazardous eruption in weeks”. The highest alert is level 5, hoisted when a magmatic eruption is underway.

In an advisory, the Institute said it was strongly recommending that people evacuate the area around the Taal volcano, which is on an island in the middle of Taal lake, and two nearby “high-risk” municipalities in Batangas province as it warned of “possible hazards of pyroclastic density currents and volcanic tsunami”.

The country’s National Disaster Risk Reduction and Management Council told reporters that an evacuation of the area has begun, led by local government officials. The volcano spewed ash that generated a 1-km (0.6 mile) high plume that later triggered ashfall in nearby communities, the Institute said.

About 8,000 residents were at risk and needed to be immediately evacuated, according to the National Disaster Risk Reduction and Management Council, citing the Institute’s data and recommendations.

The head of the Institute, Renato Solidum, advised communities around Taal lake to also take precautionary measures and be vigilant of possible lake water disturbances related to the volcanic activity.