Phillip Schofield intervenes as This Morning descends into chaos: 'Out of control' 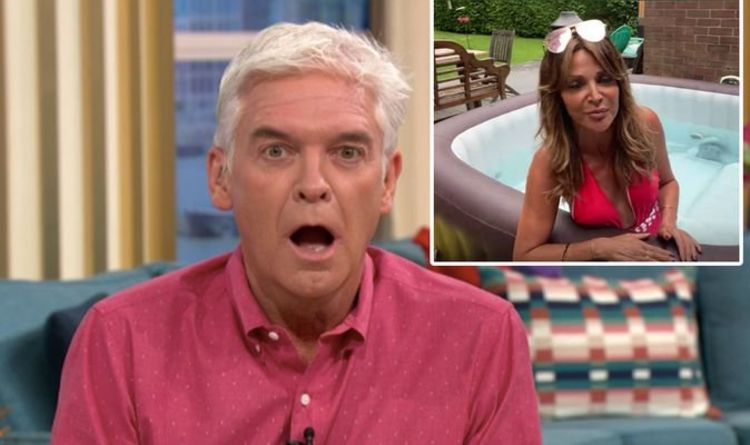 ITV viewers tuned into This Morning once more as Holly Willoughby and Phillip Schofield were back to go over some of the most pressing issues of the day as well as being joined by a range of guests. Today, the hosts had to break-up a bizarre row after two guests on the show disagreed on whether hot tubs should be used in the current climate, with a baffled Phillip asking the pair: “What’s going on here?”

Today saw Holly and Phil back at the helm and when they introduced the bill for today’s programme, they told fans they would be discussing the issue of hot tubs.

As ever, the stars were joined by two guests with opposing views on the subject at hand – TV personality Lizzie and William, a well-known etiquette expert.

Their views on the matter couldn’t have been more different as William argued they were “unhygienic” whereas Lizzie proudly showed off her own hot tub to viewers from her home.

However, as things between the pair became heated, Phillip had to step in and calm the debate down, calling it “out of control”.

The pair were arguing on whether the devices were tasteful or tacky and it didn’t take long before the argument descended into chaos.

Phil raised concerns about the noise from the hot tubs, with Lizzie soon shutting him down in disagreement.

She said: “Don’t start about the noise, Phil, because people are having barbecues with six people.”

It came shortly after his co-star, Holly, had revealed a grim fact about what could be lurking in the water as Lizzie carried on defending her stance.

However, Phil added: “I’ve got to jump in now because we’re going too far forward on this, I want to go back to Holly’s fact.”

Lizzie insisted hot tubs were similar to swimming pools and believing they were clean, with no worries about her health.

However, William argued: “It’s not the same as a swimming pool, it’s cooler than a hot tub, bacteria grows in 35, 45 degrees celsius.”

As the debate took an odd turn, Lizzie was asked by Phil: “Let’s clear up the facts – you don’t wee in the hot tub?” with the guest replying: “Phil, no, I’ve got the loo next door, I’ve got the champagne…”

As ever, Holly tried to level proceedings, adding: “To be fair to the hot tub industry, there are many very high-tech hot tubs up there. Some of them are self-cleaning, so the water turns over quite quickly.”

Lizzie reiterated her thoughts, saying: “Health benefits in the hot tub… we need something that’s going to relax us – you’re like the fun police, Will!”

Phil raised his concerns towards the end of the debate, of the idea of having more than one person in the hot tub, noting: “Three people in there is not two metres apart?”

“It’s just me for now,” insisted Lizzie, before the discussion was brought to a close.