Phillip Schofield shocked as Alison Hammond walks off This Morning... 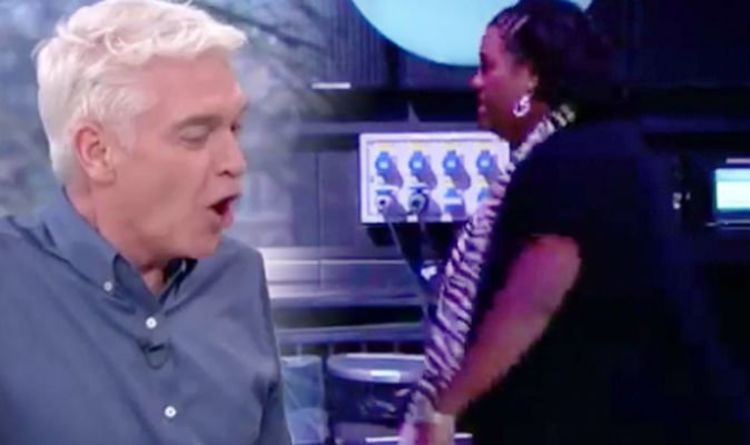 Phillip Schofield, 57, and his This Morning co-host Holly Willoughby, 38, were joined by Alison, 44, on the show today following her interview with Hollywood actor Clint Eastwood, 89. Although her segment had finished, she decided to stick around for the cookery demonstration hosted by Phil Vickery, 58. However, following a jokey tiff off-camera about a particular part of a pork dish not being made, Phillip was utter shock as the entertainment presenter walked off the ITV set.

Following an advertisement break, the silver-haired host informed viewers Alison had left the set, despite stating she was staying to join them on the show.

It transcended she was annoyed chef Phil was not making crackling, despite cooking a pork chop for the presenters.

Phillip couldn’t get over what had happened and although it was a joke, the entertainment reporter was seen on camera walking out the studio doors.

Seeing his co-star making her exit from the studio kitchen, the host remarked: “I love crackling in any form. Alison – look she’s off.”

Playing up to the joke, the entertainment reporter was seen looking hugely disappointed before leaving through the doors.

“She’s had enough,” Holly quipped as the hosts failed to keep a straight face at the unexpected departure.

“She’s livid,” the host continued, to which chef Phil added people could adding crackling to the dish if they so desired.

Phillip added: “What you could do is cut it off and do it separately in a dish and then almost put it back together again.”

“He punched me twice in the face… and started hitting me on the head [with a machete] multiple times.”

It wasn’t until he was hit on the head for the fourth or fifth time that he realised the attacker was holding a machete.