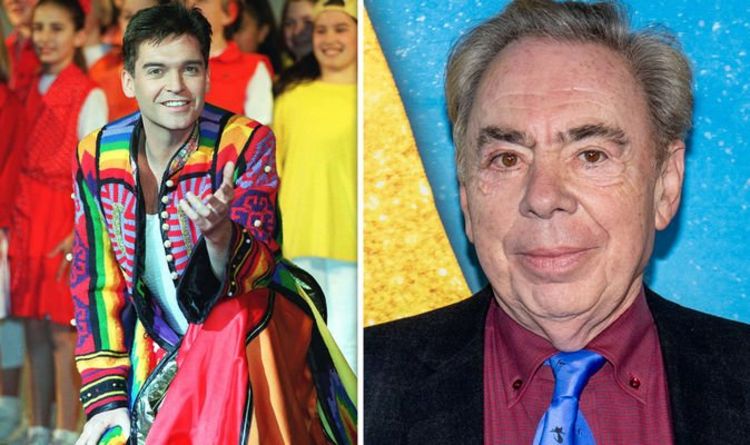 Phillip Schofield was at the peak of his young career when he was approached by stage legend Andrew Lloyd Webber. The musical theatre icon has composed 13 hit productions over his years, including ‘Jesus Christ Superstar’, ‘Phantom of the Opera’ and ‘Cats’. He is screening recorded performances of his shows for free every weekend during the coronavirus lockdown, on YouTube channel ‘The Show Must Go On’. But long before the closure of theatres all over the country, his musicals dominated London’s West End and stages all over the world. One award-winning production, ‘Joseph and The Amazing Technicolour’ Dreamcoat has remained a particular fan favourite – yet, even more so during the 90s. But when the show’s lead needed a break, Lord Webber’s eye turned to a less than likely candidate for the starring role.

At this time, Lord Webber was eager to find a fresh and relatively unknown talent for the role of Joseph.

It was claimed that he had considered a handful of actors and small screen heartthrobs but none fit the criteria longed for by the musical whizz.

The difficult recasting came after Jason Donovan, of Neighbour’s fame, decided he needed to take a holiday after performing nearly every night since it opened.

Lord Webber deliberations led him to Phillip Schofield – an unlikely choice because the future This Morning star had never stepped foot on a professional stage.

His production team reached out the emerging presenter’s agent with an offer, only for a massive misunderstanding to take place.

The blunder that would ensue was documented in Robin McGibbon’s 1992 biography ‘Phillip Schofield: The Whole Amazing Story’.

Lord Webber believed Phillip was perfect for the role based on his theory that “certain people are ‘Joseph’ types” and thought he was “most definitely” that.

“And more importantly, he had a huge young following – vital for what was essentially a childrens’ show.”

Despite the composer’s optimism, one thing he didn’t know was whether the star could sing and so invited him to an audition.

Lord Webber’s production team ‘The Really Useful Company’ contacted Phillip’s management – but the star thought it was a joke.

So the thought of performing in front of the “legendary creator” of countless musical hits “was daunting, if not plain terrifying”.

While a little rusty and in need of coaching, Phillip was chosen to play Joseph after his audition with Lord Webber.

He went onto a highly successful run of performances at the London Palladium in 1992, wowing crowds and shunning his critics.

Biographer Mr McGibbon who attended his debut show, explained that “he will never forget” the ovation received by Phillip.

He wrote: “Everyone was on their feet, cheering as he skipped through the cast to take his bow.