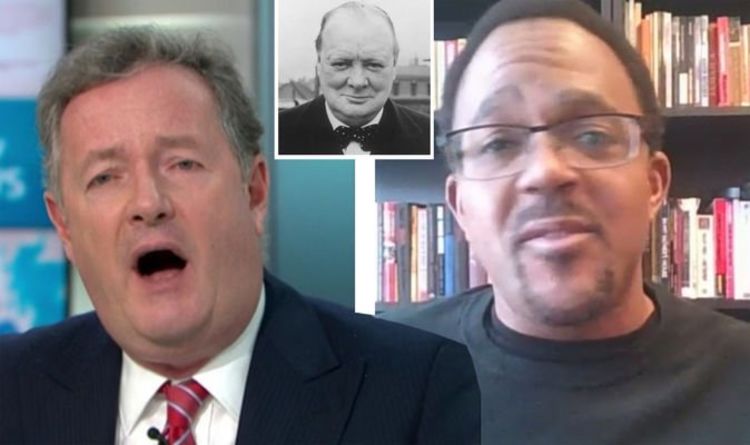 Piers Morgan and Susanna Reid welcomed Professor Kehinde Andrews and journalist Tom Harwood onto Good Morning Britain today to discuss whether controversial historical statues should remain after the statue of plantation and slave over Robert Milligan was removed in London, following Black Lives Matter protestors who toppled a Edward Colston statue. During a debate on whether the statue of Lord Nelson should be taken down and if so, should the Nelson Mandela statue be pulled down too, Andrews compared Hitler with Winston Churchill.

Andrews dismissed the idea of Mandela’s statue being pulled down before addressing an earlier argument between Harwood and Morgan on whether he would have agreed with statues of Hitler being pulled down.

Morgan hit back: “I rate Mandela along with Churchill as the two greatest people of my lifetime. I had the pleasure of meeting him, he was a remarkable man and he came out as a man of peace but he went into prison as a man who advocated violence for political ambition and he’s admitted himself that he did that.

“My point is you can construct a negative about Mandela as you can about Churchill and others, where is the line?”

Explaining his argument, Andrews said: “I just want to really point this out; the two people you mentioned – Winston Churchill and Lord Nelson are both famous for what?

“Violence! I mean, levels of violence which ail in comparison to the small amounts of violence Mandela committed.”

“That’s the debate that we’re having and I think it’s about high time we get rid of theses statues – however we get rid of them – these campaigns have been going for years and sometimes to make an omelette you have to crack eggs.”

“Would you want to get rid of Churchill’s statue then Kehinde?” Morgan questioned.

“Look, Churchill did some good certainly, but let’s be honest Churchill is also responsible deaths of millions of black and brown people. Churchill was a eugenicist,” Andrews added.

“In fact Churchill and Hitler would’ve probably agreed on many things when it comes to race.”

Interrupting, Morgan said: “Come on this is the trouble, we’ve had this debate before and you don’t just lose me, you lose the British public to try and equate Churchill to Hitler is deep offensive to people.”

Andrews said: “That’s one of the things about the racism of the Nazis, eugenics, University Central London where they’ll be tearing their statue soon. Churchill believed in eugenics and those beliefs which led to the extermination of the Jews were not that different the beliefs that led to the slavery of us they can from the same place.”

Interrupting, Morgan said: “I’ve got to defend Winston Churchill, when this country was threatened with its greatest threat to civilisation we ever had, of Adolf Hitler and the Nazis and when it looked like the odds were insurmountable, he almost single–handedly railed this country to defeat the most racist person there’s ever been.”

“That’s why I said to you, you can paint a negative picture of the early life of Nelson Mandela too, many people did. I’m not equating them but if you’re going to equate Churchill to Hitler you’re making an equivalent that I find offensive too,” Morgan added.

Those watching the discussion at home took to Twitter to express their own views on the matter.