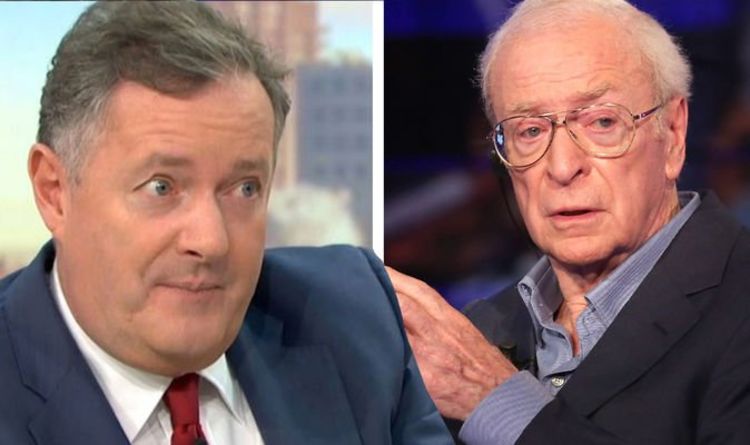 There’s not many celebrities that Piers Morgan, 55, hasn’t had the chance to sit down with and grill about their lives, whether it be a personal chat or on his famed series Life Stories, but there is one man who the Good Morning Britain presenter has always wanted to lockdown and had as a top priority. But before Sir Michael Caine gave in to his persistence, he made it clear he had no plans to sit down with the controversial star any time soon. Sir Michael has an established 60-year career as an actor, producer and author, appearing in more than 130 films during his time in the industry.

With such an interesting past, Piers admitted that he has rejected his numerous advances over 12 years, and one letter really stood out for him.

The ITV stalwart recalled the note in one of his Daily Mail columns, writing: “‘Dear Piers, Thanks for the offer. I’m a big fan,” he remembered Michael had written to him.

“‘But I love watching your show for all the reasons I don’t want to be on it. All the best, Michael.'”

He continued: “When I asked him again after interviewing his great friend Sir Roger Moore, he replied: ‘You’re getting closer, but still no cigar.’”

But as luck would have it, Piers ran into the big-screen star at the River Café restaurant in West London, who gave him a cheeky wave from a nearby table.

“It was Caine, sitting with his wife Shakira. I went straight over,” he said, before reiterating his invitation.

“‘I’m filming a new Life Stories series,’ I said. ‘Any chance of that cigar?’”

While Michael was still on the fence about having his life dissected by ruthless Piers, he was impressed when he heard Sir Captain Tom Moore was taking the plunge.

Sir Tom’s episode aired in September and was met with much gusto by fans of the 100-year-old war veteran come charity mogul.

Piers continued to repeat the actor’s words: “‘Flattery will get you everywhere. Well I love him.

The host grinned as he wrote: “Of all Captain Tom’s achievements, helping me finally book Sir Michael may top the lot.”

Piers’ most recent Life Stories interviewee was 80-year-old Cliff Richard, who stunned the presenter by admitting to throwing his fists around when it came to bullies in the playground.

Sir Cliff delved into his past and it turns out the musician stood up for himself at the school.

Recalling his younger days, the singer confessed to “beating up bullies until they drew blood” when battling with his classmates who teased him for his connection to India.

The Mistletoe and Wine singer was born in India and recalled his skin was “darker” back then.

“I would have been dark-skinned at that time,” Sir Cliff explained to the journalist.

“And they somehow knew I came from India. So they called me ‘Indi-bum’, and I was always in battles on the playground.”

Recalling a segment from Sir Cliff’s new book, The Dreamer, Piers admitted he was “startled” by the surprising admission: “Well it’s interesting, in the book I was startled by this,” he said before reading the excerpt.

“So, in your new autobiography, you say, ‘It might surprise people but I was tough at school. I had to be. If the other boys went for me, I would get them on the floor and punch them until the blood flowed.

‘In fact, I don’t remember ever losing a fight.'”