Piers Morgan hits out at Labour leadership race as they... 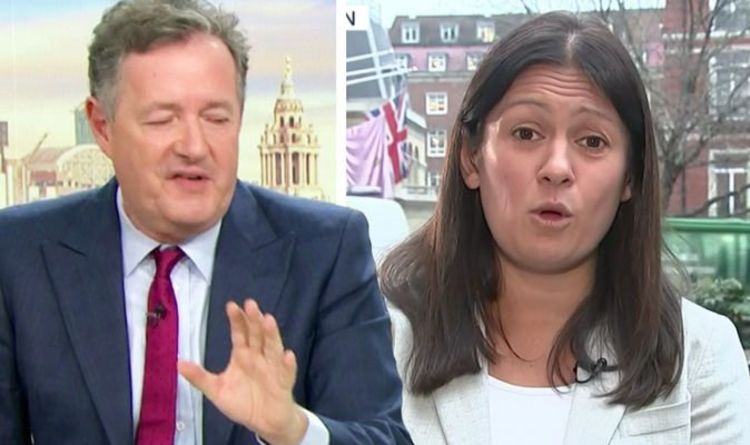 Piers Morgan was back alongside Susanna Reid on Good Morning Britain this morning and together, they interviewed Lisa Nandy MP on a live video link from London about her position in the Labour leader race.

Last night, Jess Phillips MP dropped out of the Labour leadership race and now there are only four candidates to front Labour Party and take over from Jeremy Corbyn MP.

The presenters were keen to find out what Nandy would score Corbyn out of ten for his efforts during the election.

“If you don’t mind me saying, that is the daftest question,” Nandy replied. “Human beings are complex and Jeremy Corbyn is no exception.”

Morgan stated: “The electoral gave him half out of ten, he got one of the biggest drubbings in history of elections. There’s no getting away from that, the Labour party was absolutely annihilated.”

“Voting for people and rating them is part of the electoral process!” Reid remarked.

“The challenge now for the Labour party is who’s going to be electable. You can all talk as much as you like about what you would do, but without power it is meaningless!” Morgan ranted on.

“How are you going to persuade the electorate you’re not full of hot air like I assume Corbyn to be, you’re full of meaningful substance, going to improve their lives enough to make them vote for you?” He continued.

“I’m going out and making the case, not playing it safe. We need to up our game and we could be back in power in four years time in we get it right.”

Nandy was also probed about Phillips’ comments regarding a woman taking over the mic as the Labour leader.

Morgan stated: “Jess Phillips said just before she left the race, that the mic should be passed to a woman, then with great irony, as one of the women candidates she dropped out.

“Was she right in saying, because the Labour party has never had a female leader and now there are so many female candidates in this race and only one man, was she right to say the right thing for the party is to have a woman leader next?”