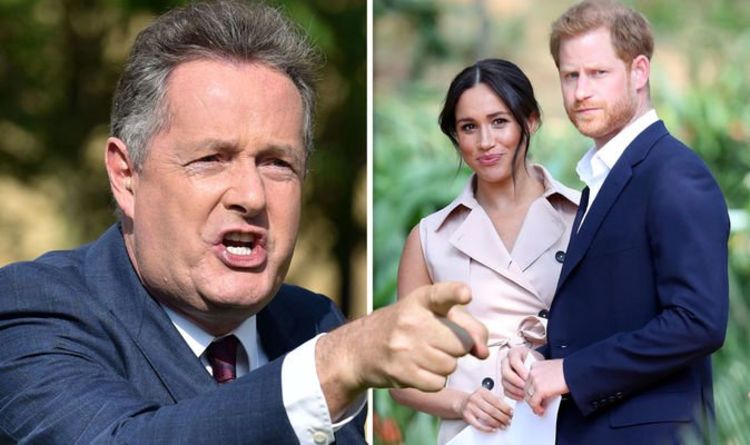 Piers Morgan, 54, didn’t hold back when he posted a seemingly sarcastic retort in view of his seven million Twitter followers this afternoon about Prince Harry and Meghan Markle’s attitude towards the media. The Good Morning Britain host’s tweet comes after the Duke of Sussex promoted his Invictus Games charity single at Abbey Road today with Jon Bon Jovi.

Harry was filmed recreating The Beatles’ famous Abbey Road album cover for the media, as cameras could be seen capturing the moment in front of the crossing.

Bon Jovi’s 2019 single Unbroken has been re-recorded at the studios by the Invictus Games Choir to honour military veterans living with PTSD.

Piers retweeted a clip of Harry, which was shared alongside the caption: “Prince Harry joins @jonbonjovi and @WeAreInvictus competitors on the famous crossing outside @AbbeyRoad.”

Seeming less than impressed with the video, the presenter issued a sly dig at the royal couple by writing: “Great to see Prince Harry using the media to promote his excellent Invictus Games.”

One person agreed with the star by replying: “He is a living contradiction. Do not want media attention, but use media coverage. Do not want to serve the crown, but want all the perks and deference attached to it. We can’t blame him can we? Life has been made too easy for him until now.”(sic)

“But they HAAAAATE the media,” another fan commented.(sic)

A third Twitter user added: “The Invictus games are a credit to him, however once again he uses the media when he wants it… If it was not for those brave service men I wish no one had turned up and just left him there in the rain.”

The pair then dedicated a page on their website to how they want to interact with the media in the future.

The Duchess of Sussex also spoke out about her feelings towards press coverage about her during their documentary, Harry and Meghan: An Africa Journey.

She said: “When I first met my now husband, my friends were really happy because I was so happy, but my British friend said to me, ‘I’m sure he’s great, but you shouldn’t do it, because the British tabloids will destroy your life.’

“And I very naively…we’re American, we don’t have that there, ‘What are you talking about? That doesn’t make any sense. I’m not in tabloids!’