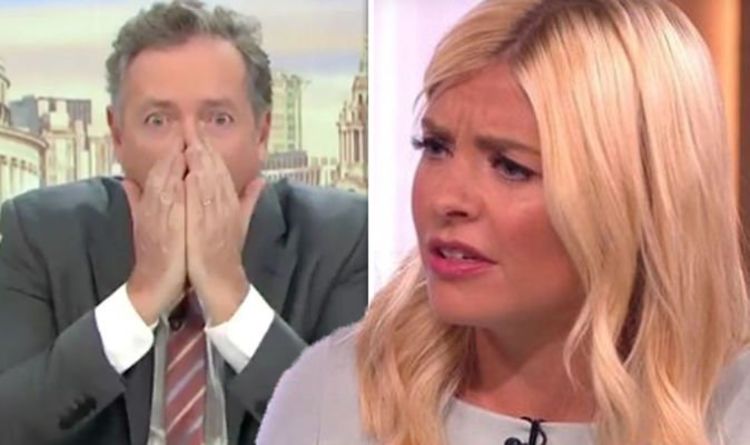 Piers Morgan, 54, was joined by his Good Morning Britain co-host Susanna Reid, 48, on today’s edition of the show and the first thing on the agenda was how their ITV colleagues won big at the NTAs. However, the controversial presenter seemed jealous stars such as Holly Willoughby, 38, had got their hands on an award and not him. Watching the coverage at home, the broadcaster sent somewhat of an x-rated message to the This Morning star, who replied by shutting him down quite spectacularly.

After boycotting the event as he knew the show he fronted would not win, Piers explained the exchange he had with Holly.

“I sent Holly a message actually,” he began, going on to tell his co-stars the x-rated message he sent.

“I said “I hope you stocked up with enough lube to stick your NTA where the sun don’t shine,” he said, to which his colleague replied: “She said, ‘That just made me laugh out loud,’ and did six laughing emojis.”

However, she then shut him down as she added: “And then said ‘If you were that funny on the telly you might win one.'”

The rest of the Good Morning Britain team were in awe of Holly putting Piers in his place, but his rant didn’t stop there.

As well as reeling in jealousy over their sister show winning a gong, the presenter also took aim at Ant and Dec, who went home with their 19th consecutive victory.

Surprised at getting the accolade once again, the boys described the feeling they felt as “sick”, to which the broadcaster couldn’t help but criticise.

“I was at home boycotting the event and I also feel sick every year at the NTAs. It’s got nothing to do with the fact I keep winning.”

“It’s to do with the fact we keep losing,” he committed, making reference to the I’m A Celebrity…Get Me Out Of Here! hosts acceptance speech.

Andy Peters, 49, then brought one of the NTAs onto the studio floor, leading Piers to mock Holly and her team once again.

His co-host Susanna said: “For a moment, I can feel like Holly Willoughby,” with her fellow panelist clasping the gong.

“Oh, we’re all one big happy family, aren’t we, Ruth?” he commented making reference to the rumoured feud between Phillip Schofield, 57, and Ruth Langsford, 60, which has been strongly denied by show bosses.

“Anyway, great news that This Morning won it for the 10th consecutive year,” Piers said with a hint of bitterness.

He continued his rant about Ant and Dec: “Great news Ant and Dec won again and talking about being sick boys, try never winning it and see how sick you feel then.

“Trust me. The nausea you feel building each year as the tension mounts about whether you’re going to win for the 19th consecutive year.”

Joking how the team weren’t riled about losing out, Susanna quipped: “I think we cover it really well, don’t you?”