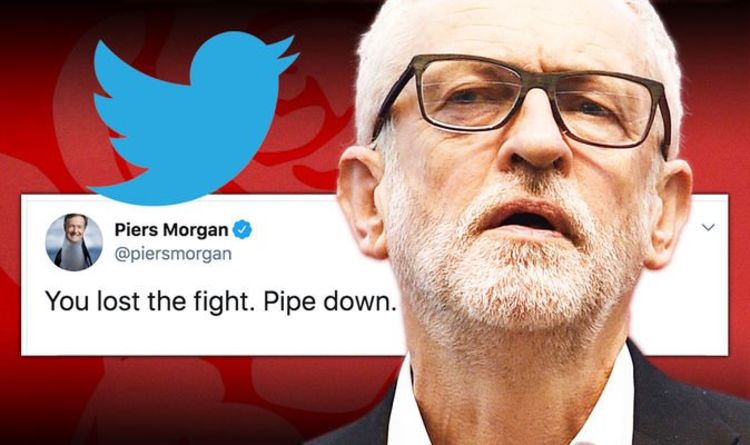 In light of the Labour party’s terrible election loss, Piers criticised Mr Corbyn for not fully recognising the dire situation the Opposition is in. Piers wrote on Twitter: “You lost the fight. Pipe down.”

Agreeing with the Good Morning Britain presenter, some issued their disbelief in Mr Corbyn’s stance.

One person wrote: “Worst Labour defeat in 80 years but apparently sticking around to ensure they lose the next one too.”

Another wrote: “He still doesn’t realise he lost.

“He is unbelievable. I don’t think he even realises he won’t be leader.”

A third also commented: “Incredible. He still doesn’t know why he lost.”

Labour suffered their worst electoral performance since 1935 as Boris Johnson stormed to an 80-seat majority.

Soon after Labour’s poor performance, some within the party hit out at Mr Corbyn over his leadership of the party.

Chiefly, party officials admitted Mr Corbyn’s handling of Brexit had been one of the key reasons for the electoral slump.

Mr Lansman said: “This was primarily about Brexit.

“It is true Jeremy Corbyn’s brand was damaged by Brexit primarily.

“But it was a difficult path to travel, and it was the right route.”

With the party now sitting with just 203 seats, a loss of 59, Mr Corbyn announced he would step down from the party.

In light of his future resignation, several candidates have announced their candidacy to become the next leader of the Labour party.

Among the frontrunners to become next leader are current Shadow Secretary of State Business, Energy and Industrial Strategy and Shadow Brexit Secretary, Sir Keir Starmer.

Sir Keir has gathered momentum in the last week and according to The Sunday Times, has won the support of dozens of MPs already.

On MP told the newspaper that rival to Sir Keir, Emily Thornberry, had attempted to ramp up support for her leadership but ultimately, she could not compete.