Piers Morgan shut down by Keir Starmer in coronavirus row: 'I'm not laughing' 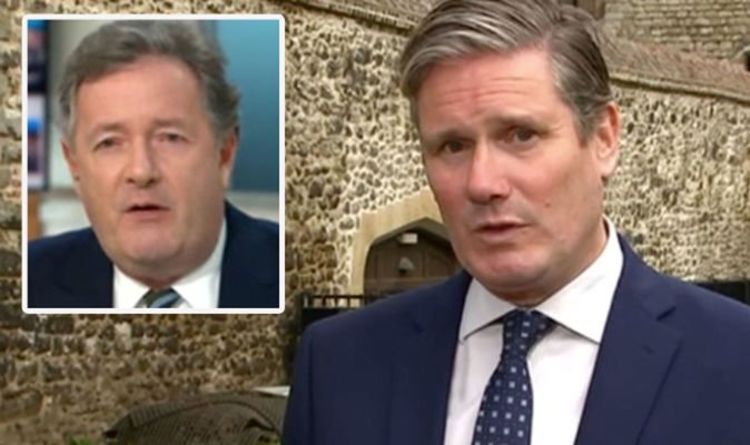 Piers Morgan, 55, couldn’t help but question Sir Keir Starmer, 57, about the latest polls which have now put the Labour Party leader ahead of Boris Johnson, 56, to become the Prime Minister during the next General Election. With the current leader of the government facing a backlash over his response to the coronavirus pandemic, the Good Morning Britain host asked his guest how he “wasn’t laughing out loud” at the majority sitting in Parliament. However, when the politician responded, he seemed to rebuff what the host had asked him, leading to an awkward response to the questioning.

Sat alongside his co-host Susanna Reid, 49, Morgan put to Sir Starmer the Conservatives came out with a “huge election victory” at the end of December.

Towards the end of January, he said Mr Johnson had become a “hero” for following through with the Brexit process before the coronavirus crisis hit.

Since March and the government’s response to the COVID-19 outbreak, members of the public are now taking a negative stance towards the Prime Minister’s chances of winning a majority again.

“When Boris Johnson stands there and says, ‘I’m very proud of our record and how we’ve handled the pandemic’, I mean how do you stop laughing out loud in incredulity?” the host asked.

“The reason I don’t laugh is because I think of the 65,000 people who have died of coronavirus and their families,” the Labour leader replied as he shut down the presenter’s question.

“Politically, the ‘new normal’ is that for the first time in over a decade Labour has a leader who outperforms their party while the Conservatives have a leader who underperforms theirs, and the crossover in preferred prime minister is a reflection of that,” Drummond continued.

Sir Starmer also blasted the Prime Minister and his government for boycotting Good Morning Britain, which is now in its 62nd day.

“If you want to be a leader, you have to take responsibility and that’s where this Prime Minister really struggles.”

“I come on your show knowing you’re going to ask me questions that I take decisions – ours will take a view on them – but I’ve got the responsibility to come on and answer,” he continued.

staronline@reachplc.com (Isobel Hine) The Chase viewers were aghast as a player made a blunder while answering a question about Britain's Got Talent stars Ant McPartlin...
Read more
Tv & Radio

Warning! The following contains spoilers for the Filthy Rich episode "John 3:3." Read at your own risk! Filthy Rich features a lot of characters that...
Read more
Tv & Radio

Over the years, Top Gear has been handled by a range of presenters from Jeremy Clarkson, Richard Hammond and James May to Chris Evans...
Read more
Tv & Radio

All 14 Dancing With The Stars Season 29 Disney Night Costumes, Ranked

Mick Carter (played by Danny Dyer) learnt an uncomfortable truth about newcomer Frankie Lewis (Rose Ayling-Ellis) last night, when he found out she had...
Read more

What exactly the Universe is made up of is a bit of a mystery, but scientists have for the first time calculated the amount...
Read more