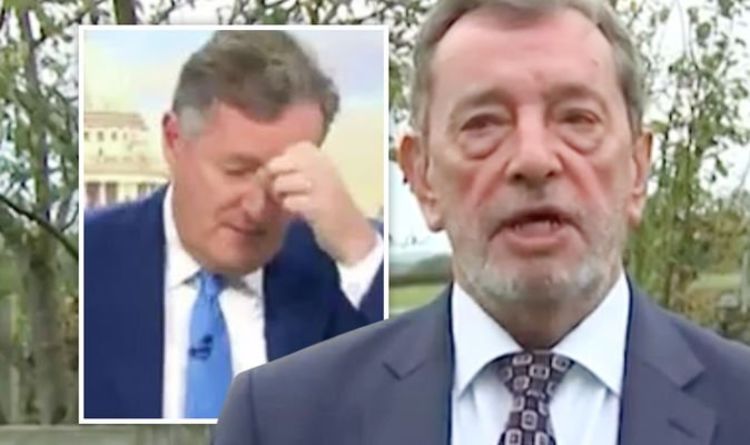 Piers Morgan, 55, was on hand to host the debate on Good Morning Britain alongside Susanna Reid, 49, and they were joined by a number of professionals to discuss the lockdown measures which are going to significantly affect the North. Former Home Secretary Lord Blunkett, 73, was in opposition of the Government’s latest action to combat coronavirus, namely stating the track and trace system isn’t working as well as it should be. However, as he tried to put his view forward, he was interrupted by the ITV presenter to which the guest ended up silencing the outspoken journalist.

Lord Blunkett began by saying of the track and trace system: “What you need is a concentrated approach so instead of COVID marshals having a go at people, we need health education champions.

“We need them out there in the community, we need to ensure people are following basic, sensible rules.

“We need the 60,000 people recruited back into the health service, former health service workers actually deployed sensibly where they’re needed most.

“We need to open the Nightingale centres and be prepared to open new ones so we don’t displace those who are waiting for essential surgery so they don’t die because they’ve been displaced by people being taken into hospital.

“And above all, we need common sense in terms of firstly, where the evidence is and secondly, how you count the figures,” he continued.

Morgan went on to say he agreed with the guest but the former politician jumped in and silenced him before he was cut off.

READ MORE: Piers Morgan hits out on being ‘cruelly ignored’ by the Queen

“No, hang on. I’m just going to finish this sentence Piers, thank you very much,” the former Home Secretary said as he snapped at the host.

Morgan was left with no choice but to remain quiet as the politician continued with what he was trying to say.

Lord Blunkett then picked up where he left off, explaining to the presenters where the track and trace system is failing.

“Nottingham is half the size of Sheffield with two major universities. Three-quarters of the 2,600 who, over the weekend, were identified as having the virus, actually were students.

“Take those out of the statistics and then concentrate your attention of where it’s needed [the most],” he declared.