Piers Morgan slams Gove as daughter gets covid test within 24 hours ‘One rule for you!' 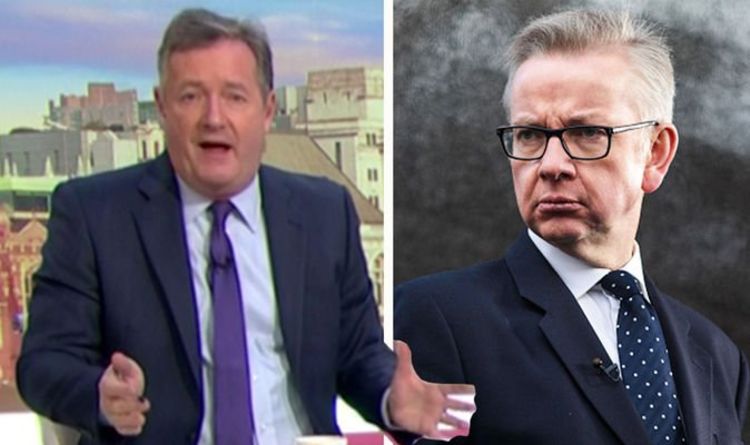 Despite it being Bank Holiday Monday, Piers Morgan and Susanna Reid were back at the helm of Good Morning Britain earlier today, delivering the latest news and discussions surrounding the coronavirus pandemic sweeping the nation. Before introducing the latest guests onto the show, Morgan spoke about a news story which has come to light; Michael Gove MP getting a covid-19 test for his daughter who developed virus symptoms in order to come out of self-isolation and return to work.

“Before we get to our panel, a story we haven’t discussed; Michael Gove obviously a senior member of the government, was seen out jogging and this surprised people cause he’s supposed to be under 14-day self-isolation because one of his household had shown symptoms of the virus,” Morgan began.

“Anyway, it then turns out that it was his daughter who had shown the symptoms, and he had gone to Chief Medical Officer [Dr.] Chris White – Michael Gove – and asked for permission to test his daughter so he could return to full government detail.”

“Something every NHS worker in the country would like to be able to do,” Reid interjected and pointed out.

“His daughter showed symptoms on April 5, it now transpires within 24 hours Mr Whitty had approved the request by Mr Gove for his daughter to be tested,” Morgan read.

“By Wednesday, the NHS test had come back negative. Now, they have taken a position if you are a senior member of the government in the fight against this [coronavirus] you should be back at your workplace as soon as possible.

“You could argue you could do the work as well from his home, and you could also argue – as I’m sure as many people will this morning – that if you’re a front line NHS worker in exactly the same position, why are you not getting a test?” Morgan continued.

He then explained how one paramedic show symptoms of coronavirus and he and his household of three other paramedics all had to self-isolate because they couldn’t get a test to rule out whether or not they all had the disease.

“What is the difference between Michael Give and an NHS worker? He can carry on working from home!” Morgan slammed.

“This is what we want for everybody on the frontline, the ability to test them immediately, so if they’re negative they can get on with their lives and go back to work,” he continued to rant.

Later on in the show, Morgan and Reid were joined by Rachel Reeves MP, Shadow Chancellor of the Duchy of Lancaster and she was asked whether she knew about Gove’s daughter getting a coronavirus test.

Morgan tried again: “Should he [Gove] have done this?”

“I would have reservations, I wasn’t aware of it [happening] but there shouldn’t be one rule for some and another,” Reeves said.

“Doctors and nurses have to be at their work place, you are currently working fro your home, Michael Gove could have worked from home!” Morgan remarked.

“I’d like to hear Michael Give explain why he can do this! Is it one rule for you and another for doctors, surgeons and everyone who has to self-isolate?”

It comes after Gove’s wife Sara Vine told the Daily Mail, whom she writes a newspaper column for about her family being on lockdown.

She said her daughter, Beatrice, 17, had come down with a high fever and “assorted Covid-19 symptoms” last Sunday (April 5).

“She seems perfectly fine now (oh, blissful youth),” she added. “But, as a precaution, the rest of us are now self-isolating, including my husband.”

Gove tweeted confirmation of his family’s isolation, he wrote: “Many thanks for kind messages. In accordance with the guidance, I am isolating at home after a member of my family started to display mild symptoms of coronavirus on Sunday.

“I have not displayed any symptoms and am continuing to work as normal.”