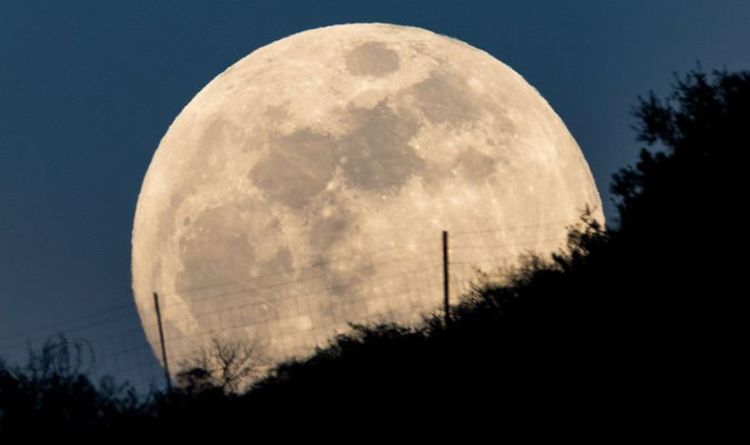 But Full Moons always appear full for about three days centred around the peak.

So if you look up tonight after sunset, the Moon will already look big and bright.

Stargazers are also in for a treat because the Pink Moon will be spectacular Supermoon.

As the Moon races around the planet on an elliptic orbit, it will come closer to us than at any other point this year.

When is the Pink Moon this year?

The Pink Moon is traditionally the fourth Full Moon of the year in April.

This year, the Moon will position itself directly across from the Sun at about 3.35am BST (4.35am UTC), when viewed from the UK.

In other parts of the world, such as the east coast of the US, the Pink Moon will peak at 10.35pm EST on April 7.

But if you look out your window tonight, the Moon will already appear to be full.

Astronomer Deborah Byrd of EarthSky.org said: “Just be aware that the Moon will look full for at least a couple of nights around the instant of Full Moon.”

Unfortunately, stargazers will be disappointed to know the Moon will not turn bright pink tonight.

On the flip side, however, the Pink Moon will be the biggest and brightest Full Moon of the year.

The Pink Moon name is believed to originate in the time-keeping traditions of Native American tribes living on the east coast of America.

The unusual names are meant to keep track of the changing seasons by reflecting changes in the landscape.

For instance, the Strawberry Moon in June is named after strawberries ripening in the wild.

Other lunar names, such as the Snow Moon in February, are named after the weather at that time of the year.

“According to this Almanac, as the full Moon in April and the first Full Moon of spring, this is the Pink Moon, a name that comes from the herb moss pink, also known as creeping phlox, moss phlox, or mountain phlox, which is native to the eastern USA and one of the earliest widespread flowers of Spring.

“Other names for this Moon include the Sprouting Grass Moon, the Egg Moon, and among coastal tribes the Fish Moon, as this was the time that the shad swam upstream to spawn.”

The Moon is also known as the Paschal Moon because Easter is celebrated on the first Sunday after the first Full Moon of spring.

Mr Johnston said: “In the Christian ecclesiastical calendar this is the Paschal Moon, the full Moon from which the date of Easter is calculated. Paschal is the Latinized version of Pesach.”