Pixel Buds review: Google is back, but is it enough to challenge the AirPods? 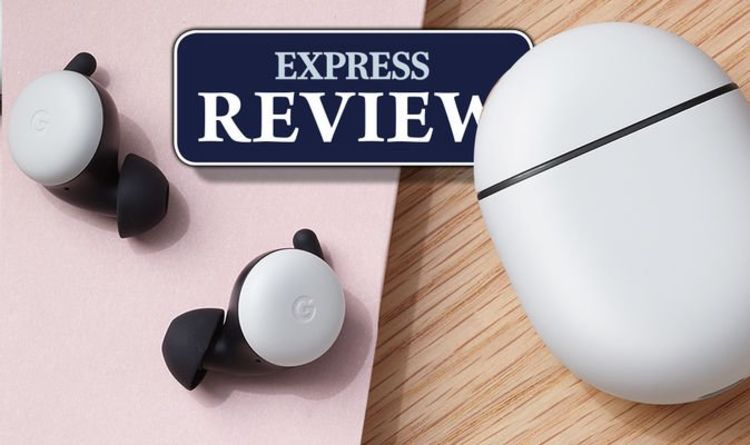 Google has just released its all-new Pixel Buds in the UK and the good news is these new buds are leaps ahead of their predecessor. The first attempt, also known as Google Pixel Buds, were released back in 2018 and widely seen as a bit of flop. In our review, we called the original Buds “a little disappointing” with “mediocre sound quality and an annoying fit”. Fortunately, these aren’t issues with the all-new Pixel Buds, which are a massive improvement.

First, the design of both the earbuds themselves and the carry case is really impressive. Google should be commended for producing such a slick bit of kit.

The smooth pebble-like charging case is not only perfect in size, but also really tactical to hold thanks to the soft matte finish. For our money, the Pixel Buds look more refined than anything else on the market, from the Galaxy Buds+ to Apple’s hugely-popular AirPods.

This case not only refills the buds wirelessly, but can also be recharged without the need for a cable, which is a nice added bonus. If you have a smartphone that supports reverse-wireless charging, you’ll be able to rest the Pixel Buds case on the back of your handset to quickly top-up your ‘buds. Of course, it also works on any Qi charging matt.

Opening the lid of the case – which flicks open with all of the satisfying ‘click’ of a Zippo lighter – and you’ll find the two buds placed neatly inside. Both earbuds are easy to remove and replace when they run low on power. Like AirPods, they’re secured in-place with magnets, so there’s no chance of them falling out of the case onto the grubby train floor during your commute.

READ MORE: Thought Apple AirPods were expensive? You ain’t seen nothing yet

And if they do, Google lets you play a high-pitched noise from a single earbud to help you quickly locate it, which is a handy feature you’ll hopefully never have to use.

Once tucked inside your ears, the buds offer a pretty comfortable fit and they also look very subtle, which isn’t something that can be said for most of its rivals. Wearing them for long periods shouldn’t be an issue.

Honestly, we’re had a mixed experience wearing the Pixel Buds. While some members of the team found them incredibly comfortable, others have struggled to get one with them and they do require some patience to get the perfect fit.

There is a certain way to twist them when placing them in your ears to secure them in place. Once you’ve mastered it, the Pixel Buds feel incredibly secure – you’ll be able to run on a treadmill without any worry these are going to drop out – but be aware that they aren’t as easy to get in your ears as AirPods.

One advantage of the slightly faffier twist approach taken by Google is that once inside your ear, the Pixel Buds create a pretty good seal. Without any active noise-cancellation, the buds still do a half-decent job of keeping out the sound of traffic from ruining your playlist. There are a few interchangeable tips in the box for different-sized ears.

The overall sound quality on the Pixel Buds is pretty good and they are perfectly capable of booming out all of your favourite tracks. There’s enough bass for our tastes and music has a decent level of clarity.

Of course, these certainly aren’t the best when it comes to audio quality – they’re about the size of a five pence piece, after all – but if you’re looking for a convenient, lightweight earbud to listen to your music rather than a pair of over-hear headphones… these are about as good as things get at this price.

Other nice features include easy controls on the side of the Buds, which can do everything from changing volume to skipping tracks and pausing songs. You can even summon the Google Assistant and hear useful information like the latest weather report, your calendar, and any messages that may have just arrived on your phone. If you’ve got dozens of Nest or other Google Home-enabled smart home kit at home, you’ll be able to switch on the lights with a request on the walk up the drive too.

Google also touts the ability to do live translation – so you’ll be read-out a translation in your mother tongue in your ear as someone is speaking to you. This is something the original Pixel Buds were able to do. With the current travel restrictions, this hasn’t been the easiest to test… but we’re not massively keen on the idea of jamming an earbud into our waiter’s ear to order a “cerveza” rather than using a Guide Book or speaking slowly in English and angrily pointing like a normal tourist.

The Pixel Buds are made by Google, which means they work much more seamlessly if you have an Android device. That’s not to say they won’t work on iPhone, but Apple fans won’t get access to the same app, which allows you to tweak settings and quickly check battery life. And if you’re using a Pixel-branded smartphone, you won’t even need to use the app as Google bundles these features into the Settings menu.

There’s a lot to like about the Pixel Buds but they aren’t without their faults.

The most obvious omission is the fact they don’t include noise-cancelling. That might be more forgivable if the buds boasted more than five hours battery.

As a good comparison, Apple’s AirPods Pro have a similar battery life but these include some truly excellent active noise-cancellation to cut-out outside distractions. Meanwhile, Samsung chose not to include ANC with its recent Galaxy Buds+ which instead last more than 10 hours on a single charge.

Of course, Apple’s (non-Pro) AirPods don’t have noise-cancellation, only have a five-hour battery life for each bud and sell like gangbusters. That’s clearly the benchmark that Google is holding itself too. Given that Apple hasn’t made any substantial changes to AirPods since they launched back in December 2016, it would’ve been nice to see Google push itself a little more.

Finally, there’s an issue that’s causing a fair amount of concern as some users are reporting a strange hissing sound when using the Pixel Buds. We did get a weird hissing – which sounds like a Walkman tape player starting up – with our review unit, but this was solved by resetting and repairing the buds.

Google recently told the BBC that instances of distortion were “very rare” and it hoped to fix the issue in a future software update, so hopefully this will be completely irradiated in the near future.

Our final issue with the Pixel Buds is price. We can’t help thinking Google is asking too much for these earbuds. At £179, there are much more affordable wireless earbuds that offer more features. Samsung’s Galaxy Buds+ offer industry-beating battery life for £159. OnePlus is selling a pair of AirPod-like earbuds for £79. And John Lewis recently reduced the Sony WF-1000XM3 earbuds with active noise-cancellation to £169.

The competition is really hotting up and we’re not quite sure that Pixel Buds – as stunningly beautiful and great sounding as they are – do enough to justify the £179 price tag. Especially when the Google brand doesn’t quite yet have the same cachet (or resale value) as Apple’s counterparts.