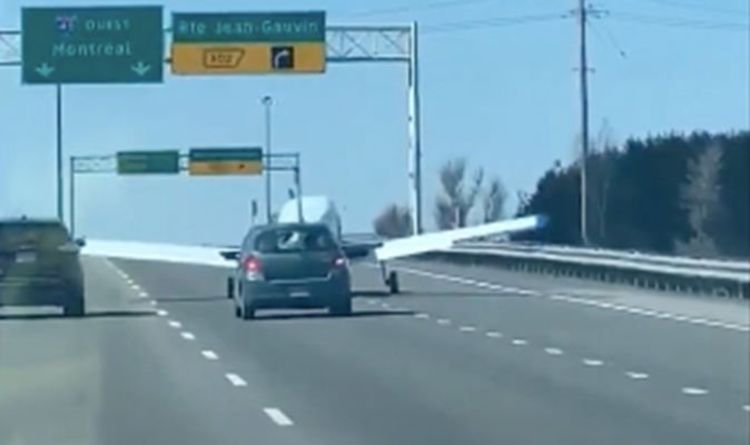 A small aircraft was forced to make a shocking landing last week in a move that has sparked a frenzy on social media. The incredible scene unfolded on a motorway near Quebec City in Canada. A video of the incredible occurrence has since made the rounds on social media sites.

The video showed cars on a busy motorway in Canada begin to slow down as a small, white plane began to approach the road as if it was going to land.

As the plane dropped lower and lower to the motorway, cars began to slow almost to a halt.

The plane then dropped to the motorway in a sudden dive before coming to a halt on the side of the motorway.

The plane, a Piper PA-28 Cherokee, managed to emerge unscathed.

She told The National Post: “We received calls mentioning that an airplane was landing on westbound Highway 40.

“Fortunately, the aircraft landed without a collision, and then no one was injured.

“In fact, traffic was able to resume quickly in the area.”

The plane was believed to be heading to the Jean Lesage International Airport in Quebec City.

Many Twitter users took to the site to express their awe of the plane and the drivers.

One user said: “In awe at how orderly all of this is. Everyone just calmly slows down, puts their four-ways on, merges smoothly to the left lane.

“You’d think there’d be more freaking out over the fact a PLANE LANDED ON THE HIGHWAY.”

Another said: “Of course he gets tailgated.”

Another said: “I don’t know who did better, the pilot or drivers.