Planet Nine a BLACK HOLE on the edge of solar system? Researchers close to breakthrough 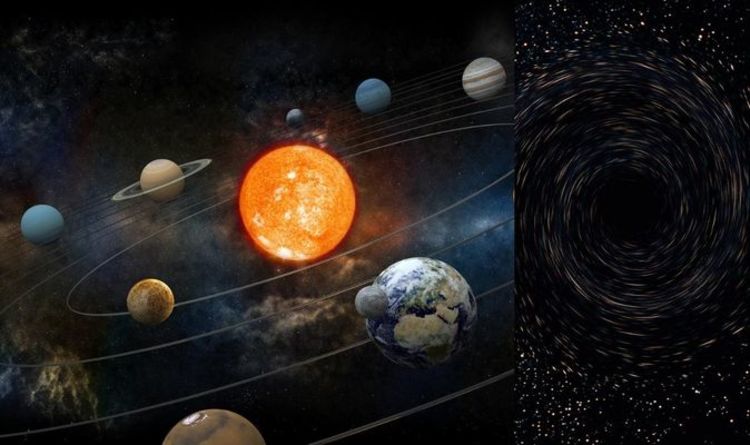 For decades, scientists have theorised there is a ninth planet – what would have been 10th were it not for the downgrade of Pluto to a dwarf planet – in Earth’s neighbourhood. The planet was believed to be 10 times bigger than Earth and 20 times farther out from the sun than Neptune – the outer-most planet in the solar system – making it difficult for astronomers to spot.

Something which orbits the Sun past Neptune is known as a trans-Neptunian object (TNO).

While the mysterious body’s existence has yet to be officially proven, researchers strongly suspect that there is something massive lurking in space on the edge of our solar system.

Researchers began believing there was something huge on the edge of our galactic neighbourhood, as it could explain why the solar system is slightly off balance.

In most star systems, the surrounding planets tend to rotate in line with their host.

However, in ours, the planets are at an angle of six degrees off its axis.

There are also a number of other odd features in our solar system that would be explained by Planet Nine.

One of the weird features is that the Kuiper Belt – a circumstellar disc full of icy asteroids, comets and dwarf planets which encompasses the solar system – orbits in the opposite direction to the planets within it.

Now, the suggestion that the planet may be a primordial black hole – a black hole which formed shortly after the Big Bang – is gaining traction.

READ MORE: Planet Nine mystery: Is it a black hole on the edge of the system?

If an object in space is massive enough, such as the Sun, its gravitational field would be so intense that its mass can bend light.

It works in a similar way to a magnifying glass, for example, which bend light through the lens, making an object appear closer.

Since black holes produce an immense amount of gravity, looking for gravitational lensing would be a clear indicator there is something huge lurking on the edge of the solar system.

Mr Scholtz told Phys.org: “The final pieces really came together when we realized that the dark matter haloes that surround primordial black holes would be a way to observe Planet Nine if it was a black hole, because of the X-ray/gamma-ray signal it gives off.

Gareth Dorrian, The Conversation The Earth's biosphere contains all the known ingredients necessary for life as we know it. Broadly speaking these are: liquid water,...
Read more