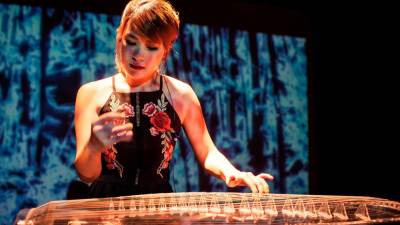 THE Chinese string instrument guzheng has a history that is over 2,500 years old. Those who recall the hit film Kung Fu Hustle (2004) would recall a fight scene featuring a pair of assassins who play a version of a guzheng. The instrument was also played by the character Xia Ziwei in the late-1990s hit China drama series My Fair Princess.

In the world of contemporary music, Mandopop star Lay Zhang is known for using it, while the British band The Korgis featured it in their 1980 hit Everybody’s Got to Learn Sometime, and virtual band Gorillaz had it on their 2005 hit track Hong Kong.

Penang-born Sara Heng is one of Malaysia’s top guzheng performers, graduating from the Central Conservatory of Music in Beijing.

During our interview, Heng said: “I started when I was 12 years old. My brother was one of my biggest influences because he joined a Chinese orchestra. He wanted to learn guzheng, and wanted me to learn with him.”

She was not familiar with the instrument until her brother showed her a video of a scene from My Fair Princess.

“There was an actress playing it, and she looked so elegant and the sound of the instrument was beautiful. That is when I wanted to learn how to play it.

“Guzheng is like a harp, and you don’t use it often in an orchestra. That’s why we needed to find a private tutor to teach us guzheng.”

Heng ended up learning from Penang-based guzheng player and conductor Lai Ah Lai, who also became her Chinese orchestra coach in high school. There, she also learned to play other Chinese musical instruments.

Today, Heng owns 10 guzheng, and sometimes plays on two or three of them per show. “In these past two years I have performed a lot with the electric guzheng,” she added.

“It has an interesting [tone], and produces a lot of sounds that the traditional guzheng cannot. So I play a lot of music that is outside the box. This is very inspiring for me.”

Most of us have seen the guzheng being played in various Chinese costume dramas, and today, some upmarket Chinese restaurants often employ a musician to play it on the premises as it lends to a certain regal ambiance to the place.

“It is a solo instrument, like a piano. That is why there are so many soloists and solo pieces for this instrument.”

Heng did take up piano herself, but had to stop playing, something which she still regrets.

She has collaborated with other artistes over the years, playing her guzheng to accompany visual artist Haze Leong during one of the latter’s speed painting sessions, or joining Sarawakian sape maestro Alena Murang and her band at a recent show.

Heng also harbours aspirations to bridge the divide between classical and pop music.

She explained: “After I finished high school, I went to study music in Beijing, where I majored in guzheng. After that, I decided to come back and l collaborated with different artistes.

“I find that there are a lot of people who are not familiar with the guzheng, so I decided to find a way to promote this instrument and promote the music.

“I needed to show that guzheng was not old school, not boring. A lot of people have this mindset that Chinese instruments are only for playing traditional Chinese music or Chinese New Year songs.

“Actually it is very innovative, so I decided to collaborate with other artistes.”

When asked if she has received any feedback from music lovers regarding the direction she is taking with her music, Heng said: “There are a lot of different opinions. Some people really like it, the way I use the guzheng in a modern way. Some students like it. Even on social media I found people like music that is creative and innovative.

“Even though I play modern music, I haven’t stopped playing traditional pieces. That is actually the spirit of this instrument, to keep the traditional touch.

“When I teach or play in concerts I still play traditional Chinese music. I think it is important for an artist to have different sides and to be open-minded, and not stick to one genre of music.”

ByThe small island is also home to some fantastic coastal roads that are perfect for long drives. Express.co.uk has rounded up five of the best...
Read more