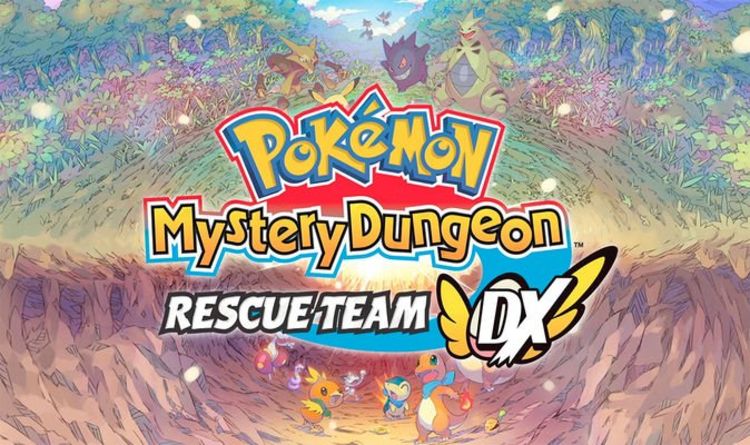 Pokemon Mystery Dungeon: Rescue Team DX is a remake of the Nintendo DS games released in 2005.

And despite the fact that Pokemon fans are still only a few months into their Sword and Shield adventures, Mystery Dungeon Rescue Team DX is out now on Nintendo Switch.

After being inexplicably transformed into Pokemon, player characters are catapulted into a foreign world whereby the residents of the local settlements are talking Pokemon.

What’s even more scary is these pocket monsters have grasped the concept of economy and labour.

After a brief questionnaire to determine which Pokemon you’ll transform into, players are quickly given a companion.

This companion acts as the player’s guide, and – crucially – a walking tutorial as gameplay mechanics continue to ramp up.

The crux of the game, however, sees the player tackling missions from the local bulletin board and venturing into dungeons to complete them.

These caves, forests, and mines aren’t regular dungeons, however… they are Mystery Dungeons!

Mystery Dungeons are unique in that they are different every time you enter, which theoretically gives players a bespoke experience for every mission.

Adventuring through these dungeons consists of pointing the Pokemon in direction of the goal and descending floors to reach the objective.

The bread and butter of the game revolves around defeating certain Pokemon, finding missing Pokemon, and searching for items. Sadly, things rarely become more interesting than this.

Of course, dungeons are also filled with antagonistic Pokemon, which players must defeat in quasi-turn-based battles.

Like the traditional Pokemon games, your army of pocket monsters know a maximum of four moves each, and will learn additional moves over the course of levelling up.

This is useful, because while my Mudkip decimated all ground-and-fire type Pokemon, grass-and-electricity enemies tended to cause a real problem.

After a dungeon is defeated, players are sent back to the overworld to spend their rewards.

These occasional instances of RPG progression are a welcome relief after a few hours of dungeon crawling, but as the game doesn’t really pose much of a challenge, they can be mostly ignored.

Returning to town does, however, offer glimpses of story and substance, which really helps to set this Pokemon game apart from others in the franchise.

Despite being a remake, Pokemon: Mystery Dungeon brings heaps of style to the console.

In gorgeous watercolored motifs, each destination holds a little bit of childlike wonder within – all of which will stand out in the players’ minds as they dive into the same mystery dungeon once again.