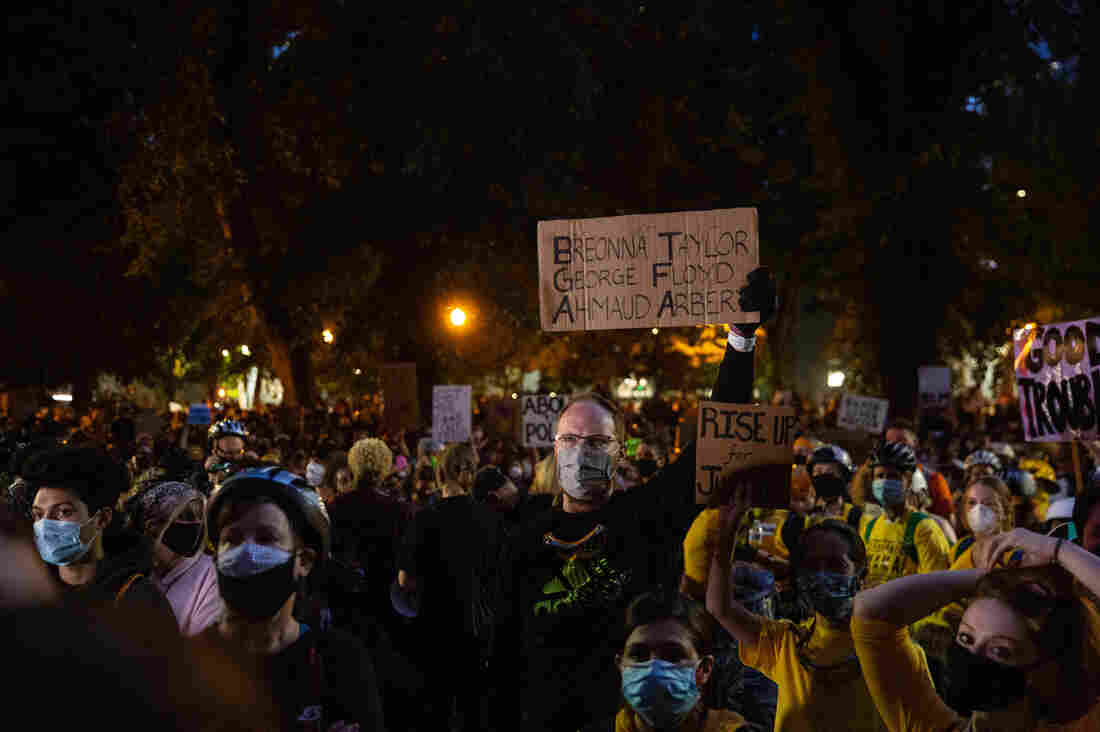 A man holds a sign with the names of Breonna Taylor, George Floyd and Ahmaud Arbery in Portland on Saturday. Bradley W. Parks/OPB hide caption 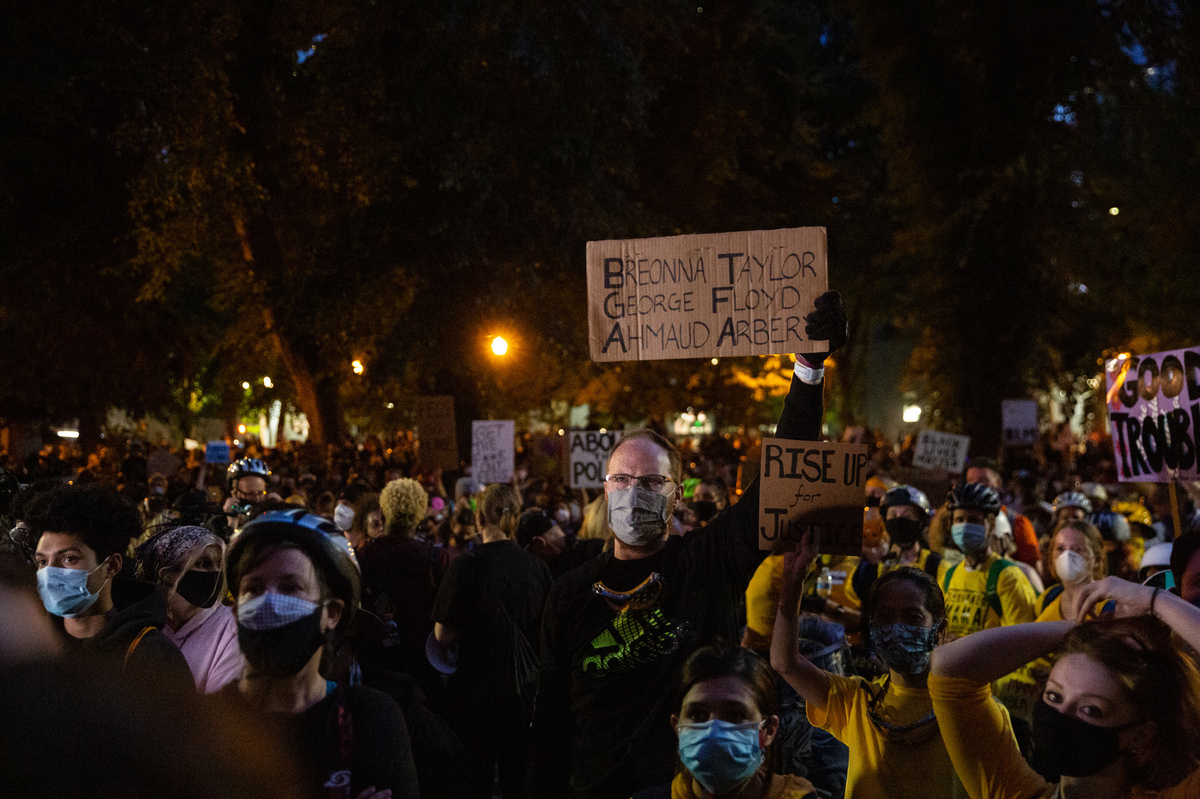 A man holds a sign with the names of Breonna Taylor, George Floyd and Ahmaud Arbery in Portland on Saturday.

Protests raged in several cities across the country Saturday night over police brutality and systemic racism. Thousands of protesters descended on Seattle and Portland, where police in both cities declared the gatherings had become riots, and made dozens of arrests. And in Austin, police said someone in a car shot and killed a protester.

Shortly before 10 p.m. Saturday in downtown Austin, as hundreds were walking down a street, many with their fists raised above them, a car turned toward the protesters.

“Everybody back up!” someone shouted in a video of the incident. Less than a second later, five gun blasts echoed through the streets. Protesters ran, screaming, and a few more shots were heard.

Police said the victim, an adult male, had approached the vehicle while carrying an AK-47. The driver of car then opened fire, hitting the man. Officials believe the second round of gunshots came from someone in the crowd, shooting after the car, the local ABC affiliate reported.

A GoFundMe page and family members identified the man killed as Garrett Foster. He had been attending the protests with his fiancée, as the two had done for some time.

“They don’t let us march in the streets, so I got to practice some of our rights,” Foster told independent journalist Hiram Gilberto Garcia. He said he started carrying the gun to protests after his roommate was arrested. Openly carrying rifles is generally allowed in public in Texas.

Police said they detained the suspect and that person is cooperating with officers. 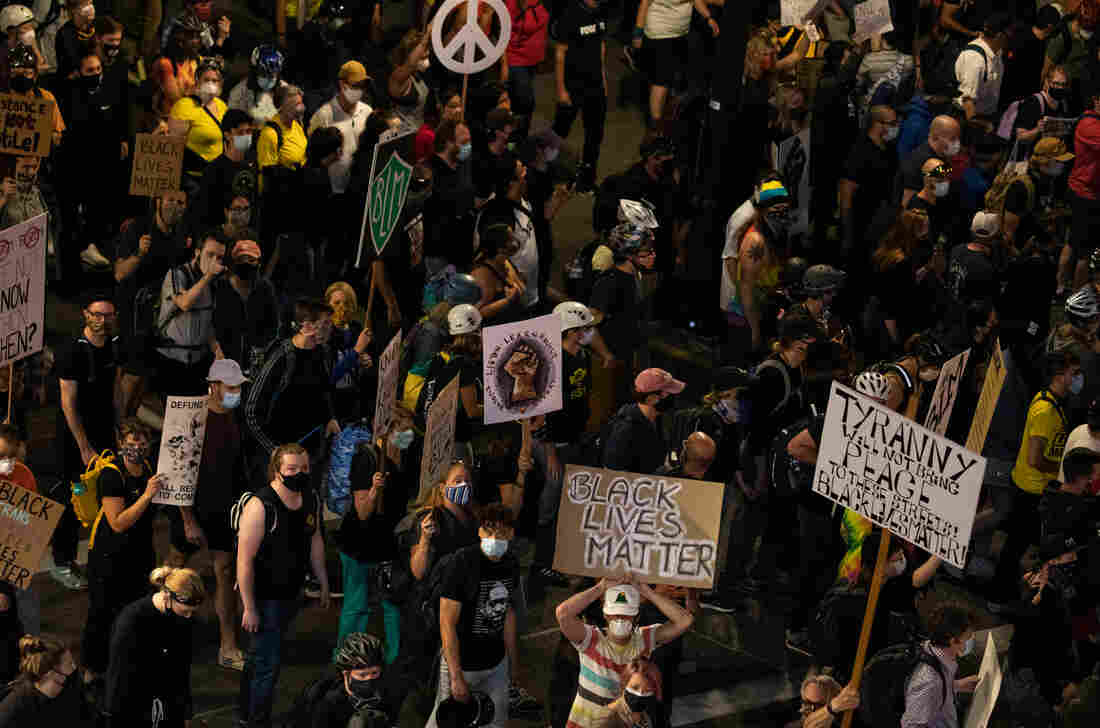 A subsection of the crowd marches toward the Marriott hotel in downtown Portland on Saturday. Bradley W. Parks/OPB hide caption 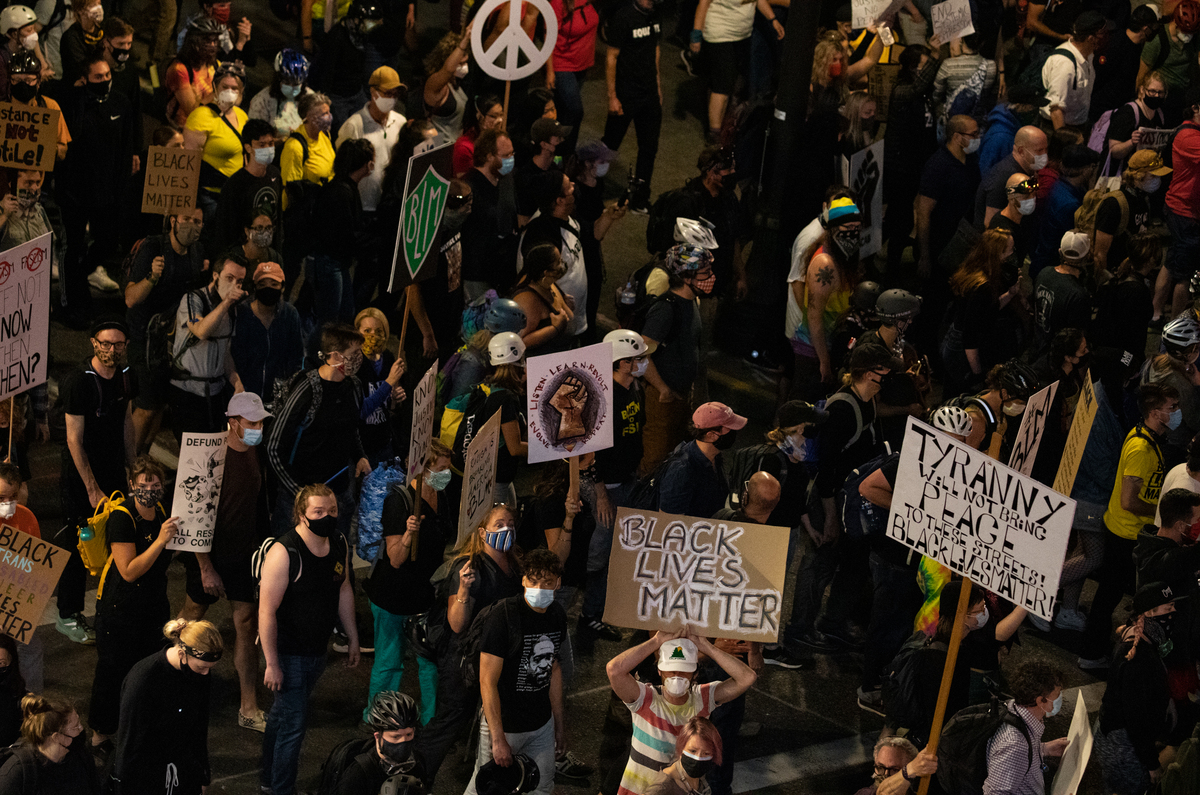 A subsection of the crowd marches toward the Marriott hotel in downtown Portland on Saturday.

Meanwhile, in downtown Portland, thousands gathered Saturday evening, breaching a fence around the federal courthouse building. Police said some protesters threw rocks and bottles over the fence, and used power tools to try to cut through it.

Protesters said they came prepared for tear gas, bringing umbrellas, gas masks and leaf blowers. The police said some of those protesters were using the objects to “conceal criminal acts.”

Some protesters threw aerial fireworks at police throughout the night. “You are on video,” Portland police told protesters over a loudspeaker. “We are filming you,” the man said, ordering protesters to “immediately stop firing fireworks.” In a tweet, police called the actions “criminal and dangerous.”

Around 1 a.m., some in the crowd used a chain to pull a section of the fence down.

“Dozens of people in the crowd maintained this level of violence and tumultuous conduct and were either intentionally or recklessly creating a grave risk of public alarm,” Portland police said. Shortly after the fence came down police declared a riot.

In Seattle, thousands gathered downtown early in the evening Saturday, and The Associated Press reports there were no signs of law enforcement at first.

After hours of these reports, the Seattle Police Department declared it a “riot.” Police tried to disperse the crowd by using pepper spray and flash-bang grenades. By 10 p.m. Saturday night, police had made 45 arrests in connection with the protests, for assaults on officers, failure to disperse, and obstruction. Police say 21 officers were injured.

And in Aurora, Colo., at a protest seeking justice for Elijah McClain, someone drove toward demonstrators marching on Interstate 225. A protester allegedly shot toward the car, but hit another protester. Several people were reportedly injured.