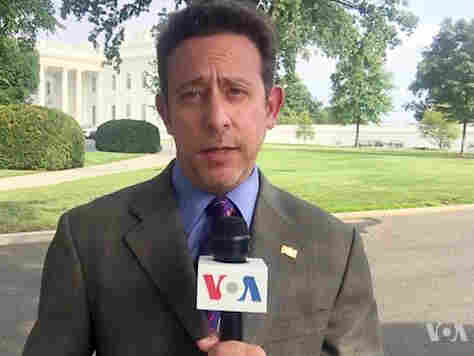 An investigation by political appointees into Steve Herman, the Voice of America’s White House bureau chief, for anti-Trump bias is the latest act that may break federal laws promising its journalistic independence. Voice of America hide caption 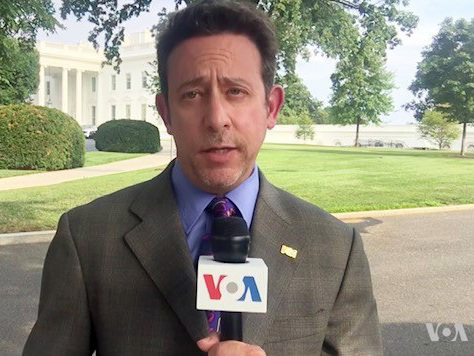 An investigation by political appointees into Steve Herman, the Voice of America’s White House bureau chief, for anti-Trump bias is the latest act that may break federal laws promising its journalistic independence.

Two political appointees at the federal agency that oversees the Voice of America recently investigated one of its most prominent journalists to make the case he was biased against President Trump, NPR has learned.

They compiled an extensive report deemed “confidential” on VOA White House bureau chief Steve Herman, claiming that in his reporting and tweets that Herman had been unfair to Trump and had broken the broadcaster’s standards and social media policies. And they repeatedly cited a “conflict of interest,” based on their conclusions from Herman’s social media postings, including his own tweets and his “likes,” according to materials reviewed by NPR. The findings were quietly presented to acting Voice of America Director Elez Biberaj for action two weeks ago.

In so doing, the two men appear to have violated laws and regulations intended to protect the federally funded news outlet from political interference or influence. That has set off alarms within the VOA newsroom, already unnerved by investigations of coverage of Democratic presidential nominee Joe Biden by VOA’s Urdu language service and the tenor of language used to describe his wife, Jill Biden, to introduce a segment on VOA’s French to Africa language service.

NPR spoke to three people who had knowledge of the episode and another five for other elements of this story. It is not clear what Biberaj has done with the file. Herman, who declined comment for this story, is perhaps the most public face of VOA. He has been its bureau chief in India, South Korea and Thailand as well as the network’s senior diplomatic correspondent.

Earlier this year, Herman drew the ire of Vice President Mike Pence’s staff after revealing the vice president had not worn a mask inside the Mayo Clinic despite his office’s awareness of the hospital’s policy requiring it ahead of time. And Herman last week filed a first-person dispatch about being barred from Joe Biden’s campaign plane over concerns of COVID-19. Herman had traveled on Air Force One a day earlier — just before news broke that White House communications director Hope Hicks and the president had tested positive for the virus.

People need to suffer consequences. And I think I’m getting the Voice of America to do that now.

Michael Pack, on the podcast of conservative journalist Sara Carter

The investigation of Herman is the latest and perhaps the most blatant in a growing series of episodes pointing to the politicization of the international broadcaster since Trump’s pick, Michael Pack, became CEO of its parent agency. Pack took over the U.S. Agency for Global Media in June. An agency spokesperson said USAGM would not comment on Herman’s situation because, “it involves the leak of privileged information.”

She added, “This is an internal VOA management issue being handled by the VOA leadership.”

The two aides involved in the investigation, Frank Wuco and Samuel Dewey, also did not return requests for comment. Both men have longstanding conservative and Republican ties.

A half hour after NPR sent its request for comment to Pack and his press aides on Sunday afternoon, the CEO issued a new memo to all staff and broadcasters titled “Guidance on Conflicts of Interest” that appears aimed at least in part at Herman. It was dated Friday, Oct. 2, and cited social media posts as one central source of concern “that can only be remedied by recusal.” And it offered this example: “[A] journalist who on Facebook ‘likes’ a comment or political cartoon that aggressively attacks or disparages the President must recuse themselves from covering the President.”

An agency spokesperson described the policy as a continuation of directives under past leaders, which include John Lansing, now NPR’s CEO.

“The U.S. Agency for Global Media and the Voice of America (VOA) have long had policies on the books governing journalist’s conflicts of interest and use of social media,” the spokesperson wrote. “These policies were developed and promulgated by CEO Pack’s predecessors, and the CEO has made clear they will be enforced.”

Last week, six senior officials at USAGM filed a whistleblower complaint with the inspector general of the U.S. State Department and U.S. Office of Special Counsel, as first reported by Politico. The complaint depicts a culture rife with lawlessness, casual cruelty, and violations of their newsrooms’ statutory “firewall,” which prohibits political figures from tampering with the journalism at VOA, and other government-sponsored broadcasters overseas, including Radio Free Europe/Radio Liberty and Radio Free Asia. The officials say they were suspended by Pack, who cited security concerns, after they raised objections to his leadership.

On Sunday evening, the Government Accountability Project filed another whistleblower complaint over the new “conflicts of interest” policy with Pack, the two congressional committees that oversee USAGM, and the inspector general for the State Department. It specifically cited the example of the White House reporter and said it was released without consultation and contradicts policies issued in June.

Soon after his arrival, Pack, a conservative documentarian, quickly set about reshaping the agency in his own image. He has said he wants to “drain the swamp,” echoing Trump’s rhetoric, shutting down approval of work visas for the broadcaster’s foreign staffers. And he argued that VOA’s journalists are unfair to conservatives, especially the president.

Though he has said many journalists there do praiseworthy work, Pack contends much of the coverage is tilted and violates the VOA charter mandating fairness. “People need to suffer consequences,” Pack told the conservative journalist Sara Carter on a recent podcast. “And I think I’m getting the Voice of America to do that now.”

Herman was among the signatories of a letter of protest sent by a group of Voice of America journalists to Biberaj in late August. They argued that Pack was physically endangering their foreign colleagues by denying the renewal of their J-1 visas.

To date, Biberaj has neither taken action nor rejected the involvement of USAGM political appointees in investigating his journalists, according to three people with knowledge.

On its own website, the U.S. Agency for Global Media says a “firewall” protects the Voice of America’s coverage from political interference — even from the agency’s CEO. USAGM/Screenshot by NPR hide caption

On its own website, the U.S. Agency for Global Media says a “firewall” protects the Voice of America’s coverage from political interference — even from the agency’s CEO.

The investigation of Herman focused in part on two stories from early September. One was headlined Trump Defies North Carolina COVID Guidelines With Large Outdoor Rally. The other, titled ‘I Didn’t Lie,’ Trump Asserts About Seriousness of Coronavirus, followed the president’s reactions to audiotapes released by author Bob Woodward’s of their conversations from early this year. Both stories closely resembled accounts from other news outlets on the events.

Wuco, a former right-wing talk show host and conspiracy theorist who has held various positions within the Trump administration, is senior adviser to Pack and USAGM’s vice president for research strategy and operations. Dewey, a senior adviser on legal matters, is a former investigative attorney for congressional Republicans who is currently under an active restraining order for making violent threats against his father. As NPR also revealed, at Pack’s behest, Dewey undertook an investigation of a video report for the Urdu language service aimed at Pakistan. That report focused on Democratic presidential nominee Joe Biden’s outreach to Muslim voters.

In the case of Herman, Wuco and Dewey marshaled facts and opinions that appeared in his stories or social media posts that reflect negatively on Trump. And the two men argued that the inclusion of any of them that were not rebutted in the same passage or post suggest evidence of his bias against the president.

The VOA’s charter mandates it to be fair to all sides in any story being covered. VOA journalists, speaking on condition of not being named, say they have been pressured since Pack’s arrival to ensure that every story and every tweet have a full rebuttal to any contention made — a near impossibility in the 280 characters afforded by Twitter. And scrutiny only seems to swing their way, these staffers say, when the subject is Trump or matters touching upon him.

VOA has long undertaken reviews of fairness and has often released those evaluations publicly, according to current and former staffers. When questions about journalistic standards arise, coverage is scrutinized by VOA’s editors or outside journalists and subject experts on behalf of the broadcaster. The parent agency, USAGM, is not supposed to conduct those reviews.

In recent written testimony to the House Foreign Affairs Committee, the suspended general counsel, David Kligerman, wrote that credible newsrooms must carry out investigations of journalistic standards themselves.

“It would be profoundly problematic for the political leadership of USAGM to carry out [such an] investigation,” Kligerman wrote. “Their carrying out of the investigation would undermine the very credibility of the organization, and its editorial independence, and raise questions about political influence.”

Pack and his aides have in the past taken exception to NPR’s reporting on incidents involving the Urdu, Spanish language and French to Africa services that could violate the editorial “firewall.” The barrier is intended to insulate the newsroom’s decision from political interference, though the agency sets broader strategy and priorities for the broadcasters. Each episode involved coverage of presidential politics. Those protections are enshrined in federal regulations, which are considered legally binding, as well as in federal law.

On the agency’s own website, on a page titled “Rumors, Myths, Untruths,” USAGM states that “the firewall prohibits interference by U.S government officials, including the USAGM’s Chief Executive Officer.” And the official USAGM posting notes that the firewall is enshrined in the agency’s enabling legislation and the National Defense Authorization Act for fiscal year 2017. “The firewall is critical to ensure that USAGM journalists and editors can make the final decisions on what stories to cover,” the posting states, “and how they are covered.”

Disclosure: This story was reported by NPR media correspondent David Folkenflik and edited by NPR media and technology editor Emily Kopp. Because of NPR CEO John Lansing’s prior role as CEO of the U.S. Agency for Global Media, no senior news executive or corporate executive at NPR reviewed this story before it was published.