POLL: Are you worried about China's growing influence across the... 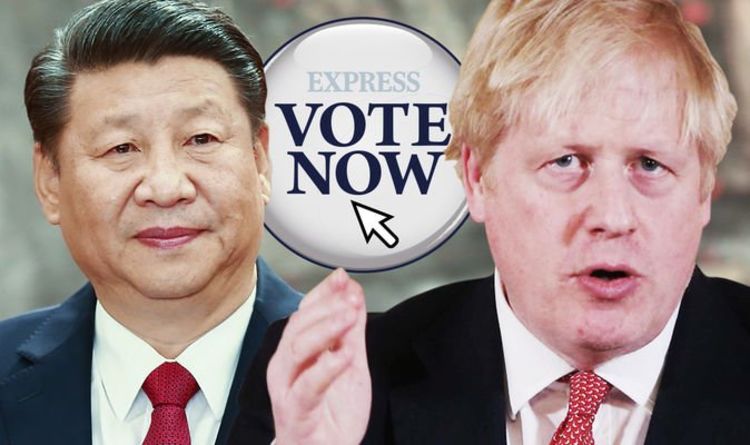 Concerns have been raised about Chinese telecoms company Huawei and Britain’s decision to allow the firm to rollout 5G across the nation. In January, the UK government approved a limited role for Huawei in building the country’s new data networks. The move caused tensions with US President Donald Trump and sparked fury among some Tory backbenchers about the future security of the country.

And, just a couple of months later, a backbench Tory rebellion tried to topple the move from Boris Johnson.

The government banned Huawei from the most sensitive parts of the UK’s mobile networks, and limited it to a 35 percent involvement.

He said: “What we’ve seen out of this COVID-19 crisis is not so much that this is China’s fault…but it has been made very clear that the Chinese Communist Party will do anything to hang onto power, including risk the lives of its own citizens.

“If it will do that to its own citizens, how much do you think it will risk ours?

“How much care do you think it will have for our security or our networks when we see what it’s doing to its own?”

He added: “This is the only time I’ve rebelled against my Government, and I wish I hadn’t had to do it, it’s a great shame.

“But I think the Government is making an error here and I hope very much that they’ll think again.

They wrote: ”Over time, we have allowed ourselves to grow dependent on China and have failed to take a strategic view of Britain’s long-term economic, technical and security needs.”

Speaking this week, hi-tech company Huawei has defended its role in the development of 5G in the UK.

The telecoms giant has said it would be a “disservice” to Britain if it was stopped from being involved in the new generation of data networks.

The Chinese firm also said it was keen to keep British people connected during the coronavirus outbreak.

In an open letter, Huawei’s UK chief Victor Zhang said that there had been a 50 percent boost to home data use during the course of the virus outbreak in the UK.

He wrote: “There are those who choose to continue to attack us without presenting any evidence.

“Disrupting our involvement in the 5G rollout would do Britain a disservice.”