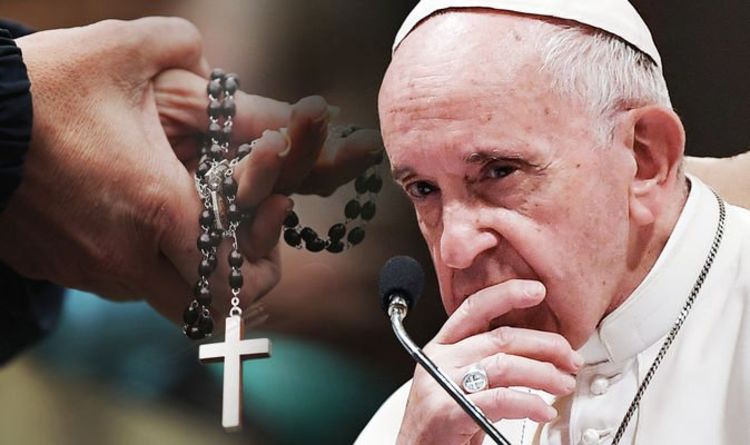 In an excerpt from a new book-length interview, published on November 4 by Fides, the Pope said his “church on the move” philosophy is not a “fashionable expression” but a summary of his mission. His comments appear to be a reiteration of his desire to revolutionise the Catholic Church. He added: “The Church is either on the move or she is not (the) Church. Either she evangelises or she is not (the) Church. If the Church is not on the move, she decays, she becomes something else.”

The Argentine Pope also criticised divisive behaviour in his interview that comes during political unrest in the Vatican.

He said there are “circles and sectors that present themselves as enlightened and even (seize) the proclamation of the Gospel through their distorted reasoning that divides the world between civilized and barbaric”.

The most recent furore surrounding Francis came as he visited Amazon synods, announcing that gay men in the region will be permitted to become priests, a policy that subverts traditional Catholic attitudes.

Addressing the public in St Peter’s Square last month, Francis said he and other participants of the gathering felt spurred to “leave comfortable shores” in seeking new ways to carry out the Church’s core mission to spread the Catholic faith.

In his interview seen in the book, titled ‘Without Him, We Can Do Nothing: a Conversation About Being Missionaries in Today’s World’, Francis called out those who questioned his Amazon policy.

He said: “They consider a large part of the human family as if they were a lower-class entity, unable to achieve decent levels in spiritual and intellectual life according to their standards.

“On this basis, contempt can develop for people considered to be second rate.

“Christianity will also reflect the different faces of the cultures and peoples in which it is received and takes root.”

He also faces opposition from outside the Church, as Italian politician Matteo Salvini remains staunchly opposed to his tenure.

The two have differing views on immigration. Francis has made caring for migrants a hallmark of his papacy, traveling to the Sicilian island of Lampedusa in 2013 in his first trip as Pope to comfort would-be refugees who survived shipwrecks and smugglers to reach Europe.

In stark contrast, Salvini used his powers as Interior Minister to ban boats carrying refugees from docking on Italian ports.

In May 2016, he tweeted: “The Pope says migrants are not a danger. Whatever!”

He was also pictured in 2016 holding a shirt saying “Benedict is my Pope”.