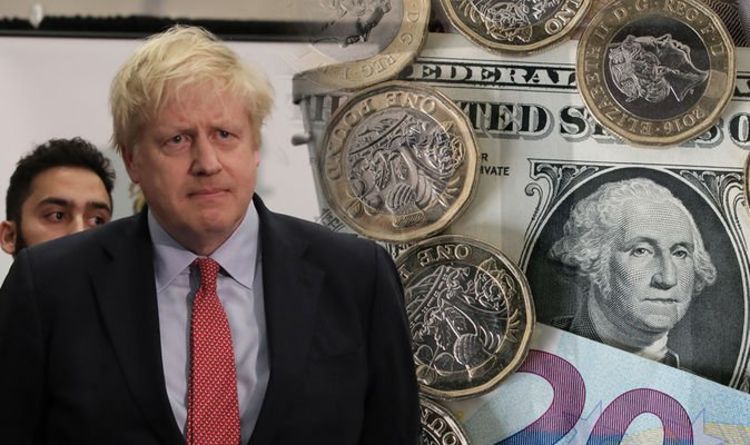 Michael Brown, Senior Market Analyst at Caxton, told Express.co.uk: “Sterling surged to its highest levels since July 2016 overnight after the Conservatives won a significant majority at the general election.

“The pound’s move comes as markets price in the increased likelihood of a smooth Brexit at the end of January.”

As the General Election results continued to be revealed overnight, seeing Boris Johnson’s Conservatives secure a majority, it was suggested that the pound could be expected to soar above predictions to $ 1.40.

Nigel Green, chief executive and founder of deVere Group, commented: “The pound has enjoyed its biggest surge in a decade on the hopes that a solid Conservative majority can finally end the Brexit deadlock.

“Many traders were caught off guard by the size of the majority and this may push the pound even higher than previous predictions. We could see bullish traders now take it to $ 1.38 or maybe even as high as $ 1.40.”

He continues: “With more political certainty due to the large majority, the UK economy is also likely to receive an election bounce.

“Billions of pounds in business investment that has been on the sidelines due to the parliamentary paralysis is now ready to be unleashed. This will give a much-needed boost the slowing British economy.”

He goes on to add: “The UK’s FTSE 100 will open higher on Friday morning. However, this is likely to be a positive knee-jerk reaction, with some gains likely to be given up throughout the day as most FTSE companies earn in dollars and the pound is stronger.”

The deVere CEO also offers a cautionary caveat: “It now looks more likely that Boris Johnson will indeed be able to ‘get Brexit done.’

“His party’s large majority in the Commons helps him pass his Brexit deal and it gives him more political sway when negotiating the UK’s future relationship with the EU and reducing the risk of no-deal at the end of 2020.

“However, there’s still a long way to go. Mr Johnson’s self-imposed end of December 2020 deadline is a mammoth challenge, and a no-deal Brexit is still possible on 1st Jan 2021.

He adds: “The result election also puts a question mark over Scotland’s future in the United Kingdom. The SNP’s gains will embolden them in their key aim of securing Scottish independence.

“Mr Johnson’s monumental task to deliver Brexit with a deal and the Scotland issue will continue to fuel uncertainty in 2020.”