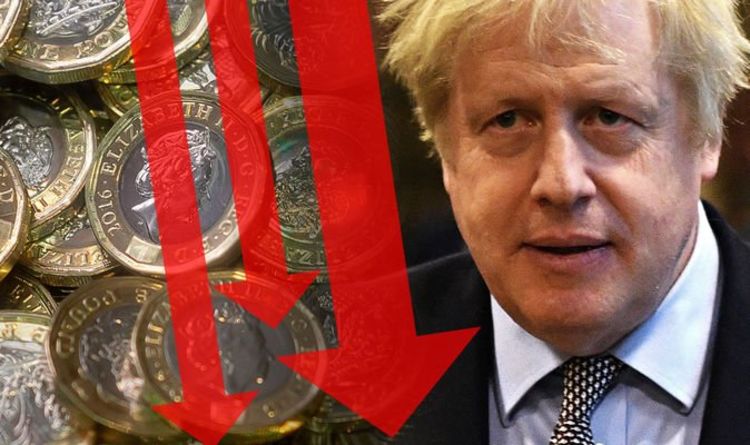 Mr Johnson will use the prospect of a no deal Brexit at the end of 2020 to push Brussels into handing him a comprehensive free trade deal. The Prime Minister’s newly-empowered Government will this week introduce a law to the Brexit bill that would explicitly rule out any extension to the transition period beyond the end of next year. A Government official said: “Our manifesto made clear that we will not extend the implementation period and the new Withdrawal Agreement Bill will legally prohibit government agreeing to any extension.”

By enshrining in law not to extend the transition period beyond December 2020, Mr Johnson is cutting the amount of time has has to strike a deal from nearly three years.

If a free trade deal is not agreed with the EU within the next 12 months – a timeframe the EU is sceptical of – the trade relationship would then default to World Trade Organisation (WTO) terms.

But the pound has taken a hammering this morning as a result, plummeting more than a percentage point against the euro to €1.1941 at 9am.

This comes after sterling hit a three-year high of €1.1994 on Friday after Mr Johnson’s resounding victory in the general election and huge Parliamentary majority of 80 eased fears of a no deal Brexit.

Financial markets and investors have reacted in shock at the lengths the Prime Minister is preparing to go in order to secure a trade deal with the EU within his reduced timeframe.

They have warned the move “sets up another cliff-edge” sending shivers through investors just as they thought there would be a period of stability.

Neil Wilson of Markets.com wrote: “Sterling tripped over its heels as Boris Johnson is looking to legislate for Britain to leave the EU fully in Dec 2020 with or without a trade deal. That means no possible way to extend the transition period.

“I must confess to believing he wouldn’t need to be so drastic, that a large majority offered the flexibility yet strength a Government craves in deal making.

“This sets up another cliff-edge and could create yet more months of uncertainty for investors just when we thought all was squared away.”

Masafumi Yamamoto, chief currency strategist at Mizuho Securities, said: “It seems like the big majority Johnson won is enabling him to take a hard line approach, which the market doesn’t like so much.

“Considering the UK economy looks set to deteriorate as people and companies start to leave the country because of Brexit, sterling’s short-covering rally is over.”

The financial expert wrote: “The news that UK PM Johnson plans to rule out (legally) any extension to the transition period after the UK leaves the EU has given sterling a kicking this morning.

“Those who thought that a big majority would free the PM to take a patient approach to negotiate the best possible deal, have been caught by surprise. And that’s most UK economists and strategists.

UK firms more exposed to the domestic economy have also taken a huge hit, with the FTSE 100 slipping 0.2 percent.

The midcap FTSE 250 fared worse and gave up 0.8 percent. The index had hit successive all-time highs in the last two sessions after Mr Johnson’s election victory seemingly cleared a path for Brexit.

Michael Hewson of CMC Markets said: “In essence all of the big gainers of the past few days are giving back some of their gains as the reality check of the possibility of a no deal Brexit, while still over a year away, has tempered some of the enthusiasm from last Thursday’s election result.”

Senior EU figures, including chief Brexit negotiator Michel Barnier, are sceptical that a free trade deal can be agreed within the next 12 months.

A comprehensive trade deal would have to encompass everything from financial services and rules of origins to tariffs, state aid rules and fishing.