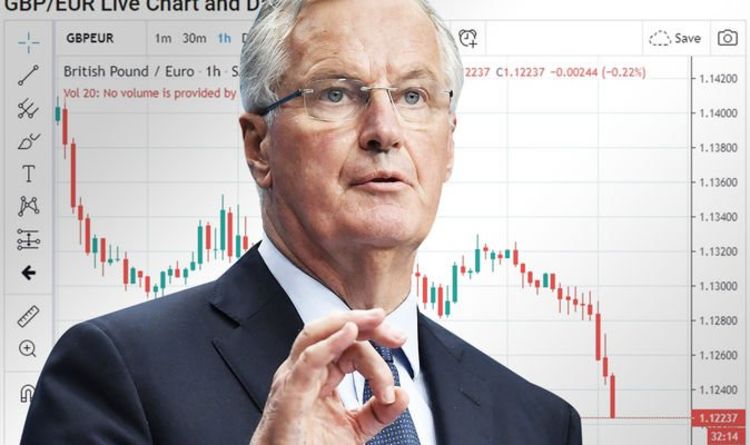 This afternoon Britain’s Brexit negotiator David Frost and the European Commission’s Head of Task Force Michel Barnier ended the third round of talks without a concrete agreement on the future trading relationship between the two sides. The news has sent shockwaves through the market and has seen sterling tumble against major world currencies.

At a press conference in Brussels this afternoon Mr Barnier said the latest round of discussions were “disappointing”.

The EU chief reiterated the bloc would continue to seek a trade deal based on a level playing field and warned the UK could not have “the best of both worlds”.

He said: “We’re not going to bargain away our values for the benefit of the British economy.”

The UK and the EU have until June to decide whether to extend the current transition period beyond December 31 – something Downing Street has insisted is not an option.

A fourth round of talks will take place next month and Mr Barnier called on the UK to “bring new dynamism” in order to make a breakthrough.

He added: “Our future partnership will be shaped by the choices we make this year together.

“The EU will not act in haste on such an important matter.

“The next round must bring new dynamism in order to avoid a stalemate between us.

“Let us make a success of round four in the first week of June by making the tangible progress we need.”

The UK’ Brexit negotiator insisted it was a “regret” that no further progress had been made and reiterated the “major obstacle” is the EU’s instistance on a “level playing field” in a free trade agreement.

In a furious statement, Mr Frost warned Brussels the UK would not sign up to a deal with ties Britain to EU rules and indicated the UK would be willing to leave without an agreement unless a breakthrough was made.

He said: “We have just completed our third negotiating round with the EU.

“I regret however that we made very little progress towards agreement on the most significant outstanding issues between us.

READ MORE: How EU ‘threw farmers under the bus’ with disastrous trade deal

“It is very clear that a standard Comprehensive Free Trade Agreement, with other key agreements on issues like law enforcement, civil nuclear, and aviation alongside, all in line with the Political Declaration, could be agreed without major difficulties in the time available.

“The major obstacle to this is the EU’s insistence on including a set of novel and unbalanced proposals on the so-called ‘level playing field which would bind this country to EU law or standards, or determine our domestic legal regimes, in a way that is unprecedented in Free Trade Agreements and not envisaged in the Political Declaration.

“As soon as the EU recognises that we will not conclude an agreement on that basis, we will be able to make progress.”

Mr Frost said highlighted fishing as another barrier to securing a deal and insisted the UK would not allow the EU “and access to UK fishing waters in a way that is incompatible with our future status as an independent coastal state”.

The UK’s Brexit negotiator also insisted it is up to the EU to change its position before the next round of talks on June 1 and confirmed Britain will publish all of the draft legal texts of the discussions so far.

He said: “We very much need a change in EU approach for the next round beginning on June 1.

“In order to facilitate those discussions, we intend to make public all the UK draft legal texts during next week, so that the EU’s member states and interested observers can see our approach in detail.

“The UK will continue to work hard to find an agreement, for as long as there is a constructive process in being, and continues to believe that this is possible.”

Facebook
Twitter
Pinterest
WhatsApp
Linkedin
ReddIt
Email
Tumblr
VK
Previous articleF1 and Silverstone strike agreement for British Grand Prix double when 2020 season starts
Next articleJohn Lennon on The Rolling Stones ‘Not in the same class as The Beatles, they imitated us’