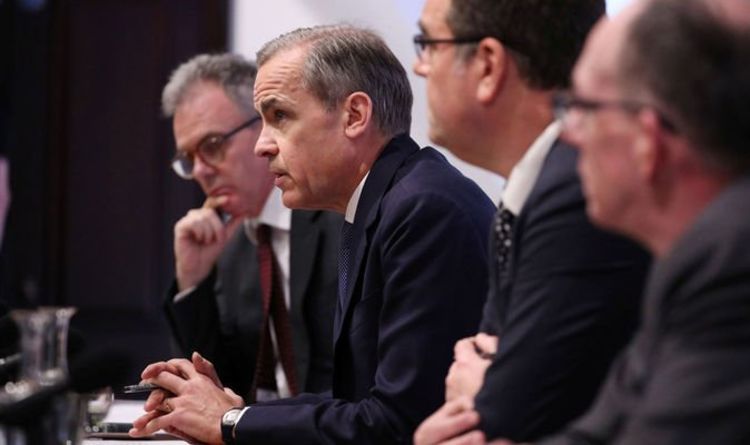 On Thursday, the Bank of England (BoE) left interest rates unchanged, stating signs that the economy had picked up since the General Election meant further stimulus was not needed. Added to this, the global economy seemed a lot more stable, prompting the bank to leave rates at 0.75 percent.

With markets pricing in a 50 percent chance of a rate cut, the fact the BoE did not ease monetary policy provided Sterling with an upswing of support.

However, the bank has left the door open to a rate cut in the future as Governor Mark Carney hands over to Andrew Bailey in March.

In the bank’s meeting minutes, it revealed: “The latest data suggest that the uncertainty facing businesses has fallen and that global growth has stabilised. We expect uncertainty to fall further and global growth to pick up. If that happens, it should help to support growth here in the UK.

“If that does not happen, then we may need to lower interest rates to support UK growth and ensure that we return inflation to our 2 percent target sustainably.”

Dr Carney pointed to positive signs for the economy in the early part of this year, although said the bank was still waiting for proof of growth in hard economic data.

Speaking to reporters after the decision, the bank’s Governor said: “To be clear, these are still early days, and it is less of a case of so far so good, than so far, good enough.”

Meanwhile, the US dollar tumbled despite making earlier gains as it emerged as an ultimate safe-haven for investors worried about the economic fallout from the spread of the Wuhan coronavirus.

Wednesday saw the US Federal Reserve leave rates on hold as well, with Chairman Jerome Powell saying he expected the “moderate economic growth to continue”.

However, he did highlight some risks to growth, including the outbreak of coronavirus that has now spread across the whole of mainland China.

Meanwhile, this afternoon data showed US Q4 GDP increased by 2.1 percent, while full-year growth for 2019 was reported at 2.3 percent.

USD slipped against the pound as this was the slowest rate of annual growth in three years and below the White House’s estimates of at least 3 percent growth.

Looking ahead, if the current risk-off mood continues and traders continue to flock to the safe-haven dollar, the pound could slump after the boost from the BoE’s interest rate decision fades.