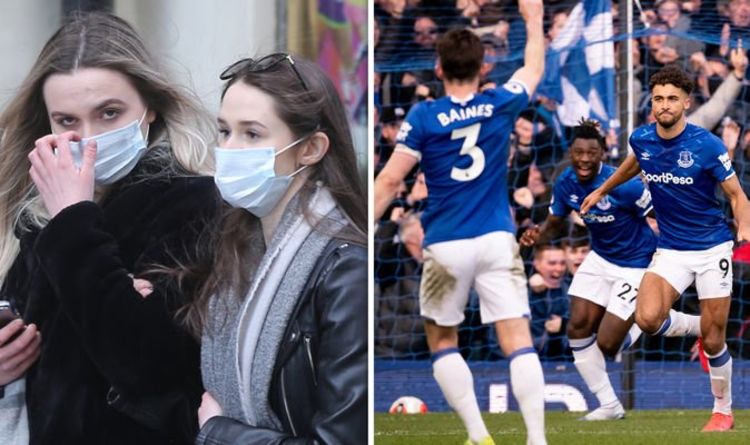 Older people, as well as those with preexisting health conditions, are known to be at significantly more risk from the virus. It comes after the number of coronavirus cases in the UK rocketed to 164 on Friday.

A second coronavirus patient, aged in his 80s, also died in Britain.

The man, who had underlying health conditions, died in Milton Keynes hospital.

On Friday the coronavirus death toll in Italy increased by another 49 to nearly 200.

Broadcasters and sports bosses will meet on Monday to discuss how the disease can be contained.

According to Sky News’ Martha Kelner options under consideration include banning over 70s from games and playing matches behind closed doors.

She commented: “The Premier League is prepared for the possibility that Public Health England will advise that some fixtures this season will have to be played behind closed doors, as has been the case in other European leagues like Italy.

“It is understood that the preference in the case of advice that the season be postponed or played behind closed doors would be that it continues without fans permitted inside stadiums.

“The league is also considering other possible contingency plans.

Fighting Coronavirus has been compared to a “war” by Dr Richard Hatchett, who advised the Bush and Obama White Houses.

The doctor who is working towards the creation of a vaccine warned the disruptive qualities of the virus haven’t been seen since the Spanish Flu in 1918.

He went on to suggest the deadly virus could have been circulating for weeks in the UK without anyone knowing.

“This is the most frightening disease I’ve ever encountered in my career, and that includes Ebola, it includes MERS and it includes SARS.”

Speaking about how China has responded to the outbreak, he said: “It is like they are at war with the virus – all of society is mobilised in the fight against the virus.”

Dr Hatchett suggested the virus may have been in the UK for weeks before it was detected.

He added: “If you look at places where death has occurred – England now falls into that category – a death signifies circulation of the virus that has been going on for at least weeks.

“It takes time for people to get sick, go to the hospital and expire – the virus has been circulating here for some time.

“I think the most concerning thing is the combination of infectiousness and the ability to cause disease and death.”

Coronavirus BREAKTHROUGH! New 15-minute £5 tests could be ready by Christmas

ByThe new saliva-based test, allegedly costing just £5, could be ready for Christmas, according to The Sun. It cited an anonymous government source who...
Read more
U.K.

ByBritain continues to battle a second wave of coronavirus with 21,238 new infections and a further 189 fatalities recorded in the past 24 hours. From...
Read more
U.K.

ByExperts are urging the Government to replace it with a circuit breaker lockdown to buy some time with winter looming - with one suggesting...
Read more