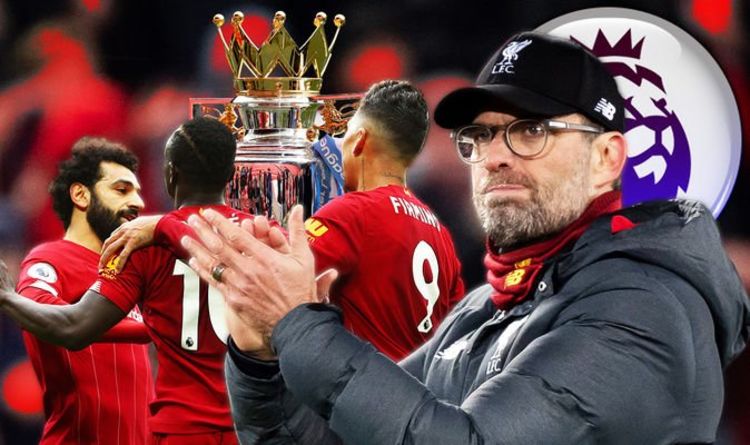 The Premier League have vowed to do everything they can to give Liverpool a proper chance to celebrate winning the league. If, as expected, the Merseyside club end a 30-year title drought by lifting the Premier League trophy for the first time there were fears that the spectator ban and need for social distancing would make it a disappointingly muted affair.

However, having been so close on a number of times before, the Premier League want to recognise fully Liverpool’s achievement in building such an unprecedented lead over their peers – with 25 points separating them and reigning champions Manchester City in the table.

The Reds are two wins away from a long-awaited title triumph with nine games of the season left to play.

Guidelines to prevent the spread of the virus within the league will include no tackling and disinfected pitches upon the return to training, with a number of protocols also in place for when matches return, with substitutes likely to wear masks and no hand-to-hand contact allowed.

But the league still want to preserve the normality of a title win for Liverpool, who have gone so long without winning England’s major domestic prize.

“If at all possible, we would like to have a presentation to give the players and staff the moment they have worked so hard for,” Premier League chief executive Richard Masters said.

“We don’t want to lose that, unless it is not possible.

“We are focused on finishing the 2019-20 season, but we also have to plan for all eventualities.”

Liverpool will not get a bus parade as they did when they won the Champions League last season, with 750,000 fans turning out on the streets of the city.

And there is a possibility that even if they win the league again in 2020-21, they may not get one next year either – dependent on how quickly a vaccine can be created and distributed.”You have to finish the Premier League in the best way possible – on the field.”

The Premier League medical adviser Mark Gillett said: “I think the feeling is that certainly in terms of a vaccine and everybody becoming immune and the vaccine being distributed, I don’t think any expert is saying that’s going to happen in the next few months.

“So certainly in terms of social distancing and the new normal which is the phrase that everyone uses and that cultural change we are asking footballers to make, I think we are going to have to be facing that for the foreseeable future so I think that’s an important point to get across.”

The league has warned clubs that the league’s new protocols – which include matches being held behind closed doors – may have to stay in place for as long as 12 months.

The current campaign is still not certain to be completed although clubs have voted for a return to non-contact training.

And Masters admits the league look to ensure matches between Arsenal and Manchester City and Aston Villa and Sheffield United are prioritised in the future schedule.

All of the English top flight’s other 16 clubs have played the same amount of matches – 29.

And if the league can manage to level the number of games played, it would help them to determine the final standings on a points per game basis if the campaign has to be abandoned in the future.

Masters added: “I don’t think it will work quite like that but it is a relatively normal occurrence at this stage of the season that there are a number of matches that have to be played.

“But I think it is a good idea to prioritise games to be played first, relatively early in the schedule.”

Liverpool goalkeeper Adrian, meanwhile, has a request if the Reds return to Anfield to play their final matches of the season.

“It’s going to be very strange and we will have to accept playing in Anfield without fans, without ‘You’ll Never Walk Alone’ although I hope they don’t put it on the speaker,” the goalkeeper told Spanish radio station Onda Cero.