Prepare For Outbreaks Like New York's In Other States, Warns Anthony Fauci 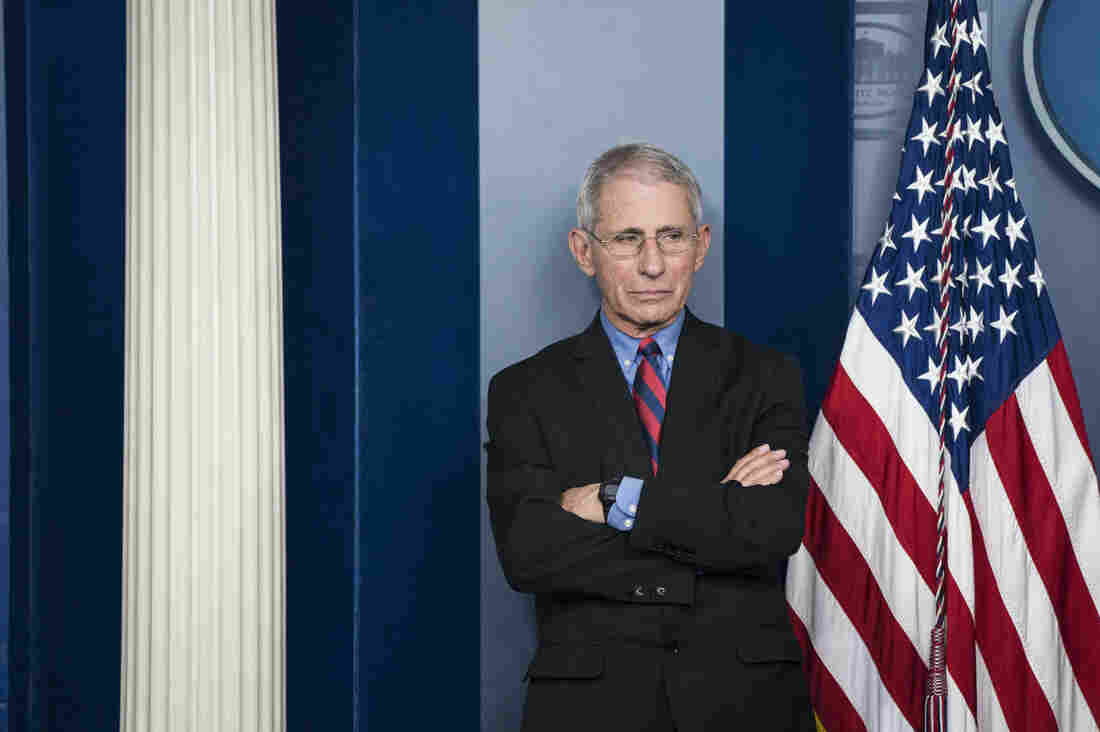 Anthony Fauci, director of the National Institute of Allergy and Infectious Diseases, has been a fixture at most of the president’s daily coronavirus task force press briefings. Sarah Silbiger/Bloomberg via Getty Images hide caption 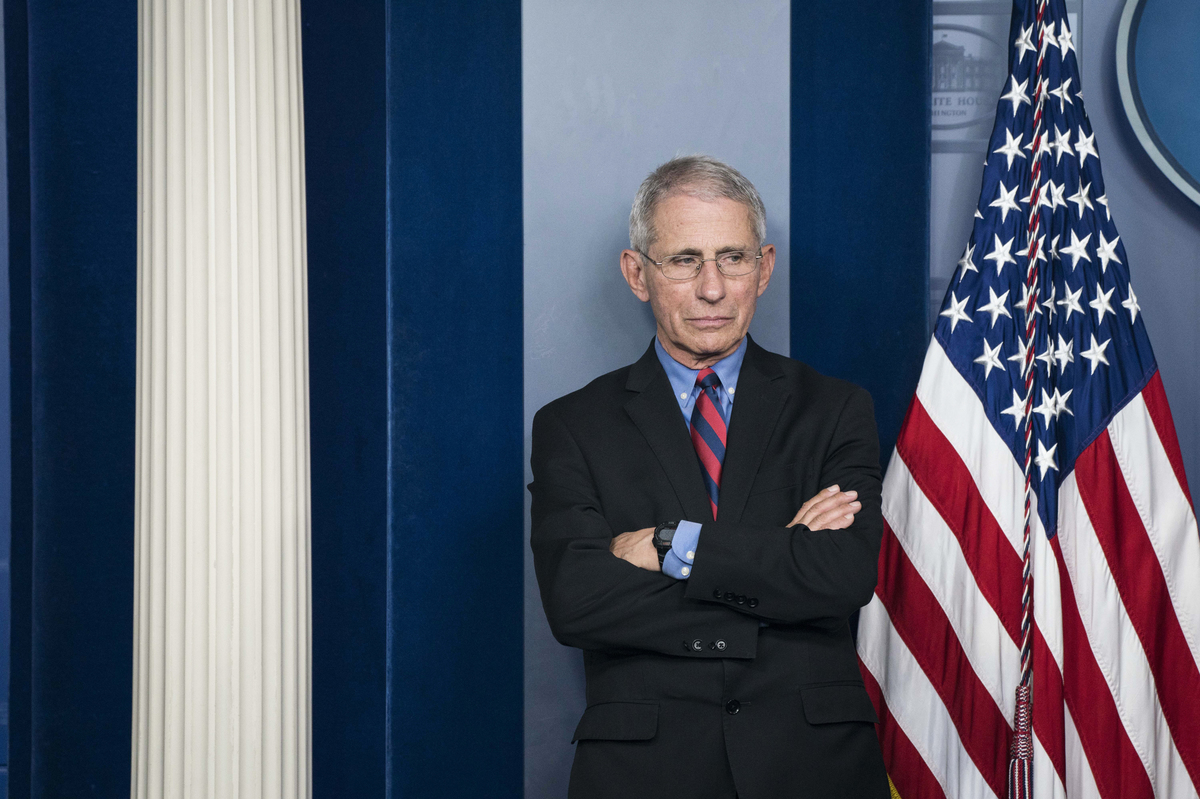 Anthony Fauci, director of the National Institute of Allergy and Infectious Diseases, has been a fixture at most of the president’s daily coronavirus task force press briefings.

Over a thousand people in the U.S. have died from COVID-19, and over a third of those deaths have taken place in New York. Nearly half the confirmed cases in the United States are in New York. The state has become a coronavirus hot spot — anyone leaving New York City is being asked to self-quarantine for two weeks.

A key adviser to President Trump, Dr. Anthony Fauci, director of the National Institute of Allergy and Infectious Diseases and member of the White House coronavirus task force, says other states need to prepare to take on outbreaks of this scale.

NPR’s Noel King spoke with Fauci about where the U.S. is headed and what strategies may help stop the spread of the coronavirus. He weighed in on increased testing capacity in the U.S. and on President Trump’s comment that he hopes to see the economy reopen by Easter. That possibility, according to Fauci, remains to be seen.

This interview has been edited for clarity and length.

Earlier this week, an official with the World Health Organization warned that the United States could become the new epicenter of the virus — could it?

Well, clearly in the beginning, China was the epicenter. Then it moved to Europe, particularly in Italy. And now we’re seeing a rather substantial outbreak in the New York City metropolitan area. Now, there are a lot of other areas in the United States. But clearly, the acceleration of cases that we’re seeing in New York City is really quite disturbing.

Nearly half of all cases in the country right now are in the state of New York. What should hospitals in New York expect over the next few weeks?

What they’re seeing already, and we’ll expect more, is an influx of cases which they’re trying to deal with locally and with the help of the federal government, with regard to beds, ICU beds and ventilators. I am in close contact with Gov. Cuomo of New York and he’s dealing with the federal government, with FEMA and other organizations to try to get to him the material and equipment that he will need.

There are other states, including Florida, that are seeing a surge in cases reminiscent of what we saw in New York maybe a week ago. Should those states be looking at New York and thinking: That’s what’s going to happen here and we need to be prepared for that?

Absolutely. That’s the course of these types of outbreaks. So Florida has gotten hit both from internal [cases], but also from travel-related cases of people who leave New York, many of whom have second homes in Florida. So we’re having a situation, as is predictable when you have outbreaks like this, that you seed different areas from hot spots.

Right now, New York is bearing a major burden of the outbreak. But when people leave New York, they go other places. And that’s the reason why yesterday at the White House press conference, we made the recommendation that when individuals leave New York, that when they get to [their] destination that they essentially self-isolate for 14 days, as well as monitor their own symptoms to make sure they don’t get sick. And if they do, to actually report it to a health care provider.

There’s still some confusion about who should be getting tested. The president tweeted last night that testing in this country has increased significantly. He also said there is no need to test all 350 million or so Americans. So who should go and get the test?

The president is correct on both counts that there are many, many, many more tests that are out there now than there were just a few weeks ago. The other thing that the president was referring to is he wants to make sure that those people who need the tests, get the tests first. Because right now, when you haven’t had enough tests to give to everyone, you need to make sure that the people who are having symptoms and need to be diagnosed are the ones who get the tests, particularly those who are in the hospital.

In South Korea, a country that has handled this virus remarkably well, they tested broadly. They tested everyone with symptoms and isolated those people and tested and isolated people they’d been in contact with. We don’t have enough tests to do that. Is there a South Korea strategy for the U.S., or have we passed that point?

Well, the United States is a big country and it isn’t uni-dimensional. So what we’re seeing, for example, is two components of how you address an outbreak. There’s containment, in which you identify as best as you can each individual person who’s infected. You identify them. You isolate them. You get them out of circulation and you do contact tracing. That’s what we needed to do in situations before it became a massive outbreak.

When you have a situation like we’re seeing in New York, they’re in what we call mitigation, because there’s so many cases up there. They need to be able to take care of the people who are infected.

Today the testing situation is infinitely better than what it was a few weeks ago. We now have hundreds of thousands of tests out there. And in the next week or so, we’ll be having like a million a week. In the beginning, it was a slow start. But right now that the commercial firms have gotten involved, we really have caught up. And we will be seeing a much improved system with regard to the availability and the implementation of testing.

Italy, the U.K. and India have all moved to lockdowns where they’ve suspended all nonessential activities. In India, people have been told not to leave their houses for three weeks. Should every state in the U.S. be doing this right now, given that we don’t have enough testing to know where the next epicenter will be?

I don’t think that we should do this uniformly throughout the entire country. I mean, obviously, you’ll always keep an open mind that you might have to revert to something like that. But today, there are clearly places that need to do that, and the governors are doing that. You saw what Gov. Newsom did in California, we’re seeing what Gov. Cuomo has done in New York state and in New York City. And we’re seeing versions of that in places like Louisiana.

So you’re going to be seeing more stringent shutdowns depending upon where you are. But there are regions of the country where, rather than shut down, we should be doing the kind of containment, which is identifying, testing, contact tracing and isolating.

At White House briefings, you and Dr. Deborah Birx have talked about an interesting scenario where scientists are able to gather data about cases all across this country and then policymakers can tailor their response based on local characteristics, like “how bad is it here?” Do you have the data you need now to tell different areas of the country they should be doing different things?

We are quickly getting to the point where we will be able to get that data. But you are correct. To be honest, we don’t have all that data now uniformly throughout the country to make those determinations. But that’s a major, primary goal that we have right now, is to get those data, because you have to make informed decisions and your decisions are informed by the information you have.

The president said this week that he’d like to see the economy reopened, up and running by Easter. That’s April 12. There seem to be real risks if states and communities come out of shutdowns too early. What are you advising right now? Should we even be considering April 12?

The president has set April 12 as an aspirational goal. He knows, and we’ve discussed this with him, that you have to be very flexible on that. He put that out because he wanted to give some hope to people. But he is not absolutely wed to that. And he keeps saying that although he would like that to be the date, he’s open-minded and flexible to make sure that the facts and the pattern of the virus determine what we do.

We have heard hopeful statements that warmer weather might slow this virus down. Does the science bear that out?

You know, the science bears it out in part because if you look historically with viruses like influenza and some of the more common, benign coronaviruses, when the weather gets warmer, viruses don’t do as well. And people tend to spend more time outdoors where the free flow of air is always good for preventing respiratory infections. That’s a pattern that’s real. What we don’t know is whether this is going to happen with this virus because this is a unique virus, which we had no experience [with] before. We’re hoping that’s the case. We hope we get a respite as we get into April, May and June.

Likely it will come around [again] next season because it’s a very vigorous virus, and we’re seeing it already infecting people in the Southern Hemisphere, now, as they enter into their winter. So I hope and I think we might get a respite with the weather, which would hopefully give us more time to better prepare for what might be a second round or a seasonal cycling.

Emma Talkoff and H.J. Mai produced and edited this story for broadcast.