President Pelosi? Pence prepares to risk it all for Trump 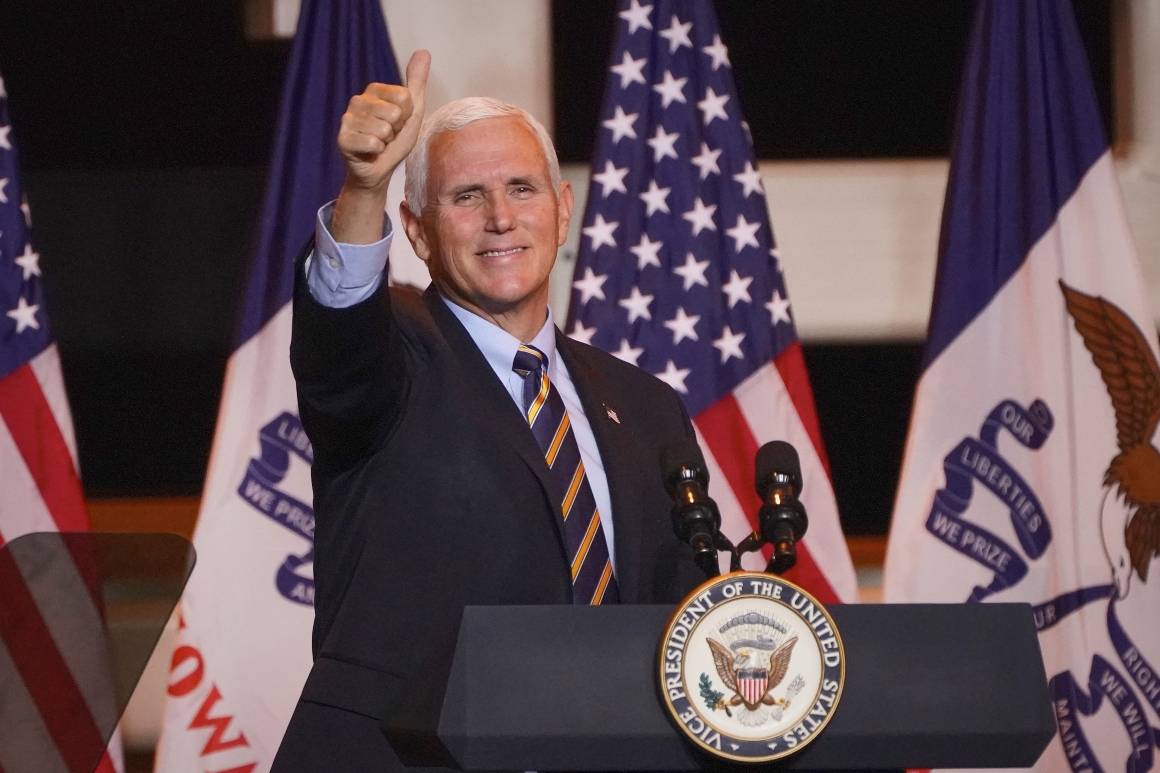 A month before Election Day, Pence is putting it all on the line in a last-ditch attempt to rescue his ticket.

The vice president himself has presented a positive face about representing the GOP ticket in a moment of crushing uncertainty, despite pressure from White House aides and allies to hunker down in Washington until Trump gets the all-clear. The president remains a patient at Walter Reed National Military Medical Center, where he has been receiving a variety of therapies and drugs to combat the potentially fatal disease.

Despite pressure to stay put, Pence allies insist he was made for a moment like this given his soothing temperament, grasp of the virus and unfailing loyalty to Trump. But other people close to Pence bemoaned his decision to fly halfway across the country while the commander-in-chief remains hospitalized and administration officials are given limited updates on his status, noting that the same protocols that will be used to protect the vice president on the campaign trail failed to shield Trump from exposure to the virus.

“You can no longer say, ‘There’s no way he’s going to catch this,’ because that’s what we told ourselves about the president and it still happened,” said one White House official.

Scott Jennings, an aide to former President George W. Bush who is close to the Trump White House, signaled that Pence should stay in town and be vigilant given his spot in the chain of command. “The president is in the hospital with a disease known to kill people. Mike Pence’s health and security is paramount.”

Although Pence and his wife Karen have repeatedly tested negative since Trump first announced his positive diagnosis early Friday, the vice president was around at least eight people who tested positive for Covid-19 after attending a White House Rose Garden ceremony where Trump unveiled his Supreme Court replacement for the late Justice Ruth Bader Ginsburg.

Pence has been recognized by people inside and outside the White House as someone taking the virus more seriously than Trump has — even though some say he may not be taking it seriously enough either. The vice president in February took control of the White House’s coronavirus task force and has shaped much of the day-to-day engagement with officials in the Trump administration and governors across the nation. But he’s played two parts in that role: sometimes trying to clean up Trump’s efforts to downplay the virus, and other times painting a rosy portrait and framing the pandemic in the past tense just as Trump has done.

Despite the ongoing risks of exposure, the Trump campaign is eager to deploy Pence as it carries out what it’s calling “Operation MAGA,” a quickly assembled effort to keep the president’s reelection operation afloat for the next 30 days by dispatching the vice president, members of the first family and key allies to virtual and in-person events across the country.

Part of that effort means getting Pence back on the campaign trail as soon as possible for “a very full aggressive schedule,” senior Trump campaign adviser Jason Miller told NBC’s “Meet the Press” on Sunday.

“He’s now the face. He needs to step up starting today,” said a former Trump campaign official, echoing a sentiment shared by current campaign aides who said it’s important for the vice president to be as visible as possible while the president is in recovery to reassure and energize the GOP base.

“We don’t operate in fear,” said Steve Cortes, a senior adviser to the Trump campaign. “The president [has] recovered with terrific progress so far. The vice president is healthy and working nonstop. Continuity of command is well-established. We will not cower or hide, not the country, nor the administration, nor our campaign.”

Pence is expected to postpone a meeting with Utah Republicans when he arrives in Salt Lake City on Monday, according to two people familiar with his plans, one of whom said the vice president will spend the bulk of Monday and Tuesday preparing for his debate on the ground with a close circle of advisers.

The Trump campaign also announced on Saturday that Pence would host an event at a tactical gear manufacturer in Peoria, Ariz., on Thursday, the day after the debate. Asked if attendees of the Thursday event would be required to wear protective face masks, Trump campaign communications director Tim Murtaugh said only that masks would be “strongly encouraged” and that temperature checks would be administered prior to entry — suggesting the Trump campaign does not plan to alter its safety protocols moving forward.

“The VP is tested daily and it’s absolutely vital for him to be out on the trail. We’ll campaign digitally, we’ll campaign in person and we’ll keep up the protocols we’ve always had,” said a second Trump campaign official.

A former senior administration official said Pence could assume the duties of the president at any time or place, if he needed, but he should only return to the campaign trail if he doesn’t host large events that lack masks or social distancing.

“The vice president has to weigh his responsibility as successor to the president with the responsibility to simultaneously set an example for our public health response as the head of the task force,” this person said.

In a 20-minute internal conference call on Saturday, an upbeat Pence gave Trump campaign staffers and volunteers across the country a pep talk urging them to forge ahead during the final weeks before the November election.

Despite being closer to the Oval Office than ever before, Pence maintained his characteristic deference to Trump throughout the call — praising the president for acting quickly to combat the novel coronavirus by halting inbound travel from China and putting Pence in charge of the Covid-19 task force.

“You know, I’ve said as I’ve traveled around the country many times in recent days, President Donald Trump has never stopped fighting for us. Now it’s our turn to fight for him,” Pence said, according to audio obtained by POLITICO.

He said at another point in the call that Trump wanted him to tell staffers to do their part to defeat the virus.

“Wash your hands on a regular basis, use hand sanitizer, wear a mask when you can’t socially distance,” he said.