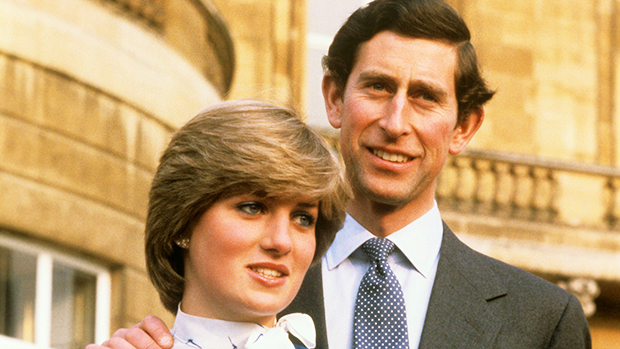 Before the season 4 premiere of ‘The Crown,’ look back at the marriage of Prince Charles and Princess Diana, from their wedding to their public divorce.

In the early 1980s, Prince Charles and Princess Diana were thought to be the epitome of a real-life fairy tale love story. She was a gorgeous young princess and he was the handsome future King of England. But beneath the stunning appearances, photographs, and interviews was an unhappy relationship between two people under the scrutiny of the world’s spotlight.

The upcoming fourth season of Netflix’s decadent series The Crown chronicles the early years of Prince Charles and Princess Diana’s relationship and marriage. As the series returns on November 15, introducing the world to the incredible talent that is Emma Corin as Lady Diana Spencer, revisit the former famous couple’s relationship. See photos and learn more about what was happening when the fairy tale came to a tragic end.

Prince Charles was officially introduced to Diana in 1977 by her sister Lady Sarah Spencer. Sarah and Charles went on a few dates themselves before Charles’ interest in Diana grew. By 1980,  Diana was re-introduced to Charles following the death of his beloved mentor and great uncle Louis Mountbatten. In September of 1980, the press got wind of Diana and Charles’ relationship and began following the young woman through the streets.

After the new year, in February 1981, Charles, then 32, and Diana, 19, posed outside of Buckingham Palace in their first engagement photos. The photos highlighted Diana’s now-famous sapphire and diamond ring, which was later given to her daughter-in-law Kate Middleton.

Just one month after they got engaged, Charles and Diana were immediately thrust into the responsibilities of royal duties. They made their first official appearance at a Gala Charity Concert at Goldsmith’s Hall in London. This was also the first of many occasions where Diana’s impeccable style was put front and center.

The two made a few more appearances at events and even spent some time together at Balmoral Castle in Scotland. But as the wedding neared, Diana became increasingly concerned about Charles’ relationship with Camilla Parker Bowles, a married woman whom Charles had secretly dated years prior to meeting Diana.

“The Stuff Of Which Fairy Tales Are Made”

On July 29, 1981, the world watched as Lady Diana Spencer and Prince Charles exchanged their wedding vows in front of guests and family at St. Paul’s Cathedral. Diana’s wedding gown, designed by Elizabeth and David Emanuel, became one of the most iconic dresses in the world. And it was on the balcony of Buckingham Palace where Prince Charles and Princess Diana began a new tradition for royal newly-wed couples on their wedding day.

As they stood with members of the royal family and waved at subjects outside of the palace gates, Prince Charles and Princess Diana shared a kiss. The moment has been recreated time and again by other royal couples, including Prince Charles and Princess Diana’s own sons. During the wedding ceremony, Robert Runcie, the Archbishop of Canterbury, described the occasion: “Here is the stuff of which fairy tales are made: the Prince and Princess on their wedding day.”

Less than one year after the couple’s nuptials, Prince Charles and Princess Diana welcomed their first son into the world. Prince William was born on June 21, 1982. In the months that followed Prince William’s birth, Diana insisted on bringing their infant son on tour with them to Australia. At this time, circumstances appeared to be happy between the two young royals. And they would add to their family not long after welcoming their first son.

On September 15, 1984, Diana gave birth to the couple’s second child, Prince Harry. Diana made another memorable fashion statement upon introducing Harry to the world on the hospital steps. She wore a gorgeous red dress with a white collar and a matching red coat for the brisk, mid-September temperatures. Prince Harry was Charles and Diana’s last child, having given the royal dynasty “an heir and a spare.”

In the years that followed, the family of four appeared happy in Kensington Palace. They even invited cameras in to see the two young boys, featuring some memorable footage of the two playing on the piano. Unfortunately, the relationship between Charles and Diana grew more and more strained. At the time that she welcomed Prince Harry, Diana was only 23 years old.

In March 1989, details of Prince Charles’ infidelity began to surface. The future King of England’s phone was tapped, which meant that his late-night conversations with Camilla Parker Bowles, with whom he carried on his affair during the years he was married to Diana, were recorded for the press to leak. By 1991, those recordings were transcribed and published by papers, and Prince Charles and Princess Diana’s marriage was once again thrust into the spotlight.

During the 1990 tour to Cameroon and their 1991 tour in Canada, the body language of both Prince Charles and Princess Diana was incredibly cold. The two looked increasingly unhappy to be in each other’s company. However, they each executed their royal duties. Still, the clear and apparent friction went on to cause members of England’s government to get involved in the months ahead.

Their Split Is Announced

By December 1992, British Prime Minister John Major announced that the Prince and Princess of Wales were officially separating. Diana subsequently lost here “HRH” title — Her Royal Highness — but retained her title as Princess of Wales. What followed for the two were a series of interviews that they did separately, sharing intimate details of what caused the demise of their marriage, and Prince Charles confirming that he had continued his romantic relationship with Camilla.

Diana maintained her place in the royal family, though, and she made parenting her sons her top priority. Though she always showed affection for both of her boys in public settings, she took the young princes out to theme parks and more during her and Charles’ separation. She also attended Christmas services with her sons. In November 1995, Diana did her own interview where she shared of her marriage, “Well, there were three of us in the marriage, so it was a bit crowded.”

The Divorce Is Official

On July 15, 1996, following 15 years of marriage, Prince Charles and Princess Diana were officially divorced. In the time that followed, Diana used her platform to shed light on humanitarian efforts. But tragedy struck the royal family and rocked the entire world, when just over one year after the former couple’s divorce, Diana was killed along with her then-boyfriend, Dodi Fayed, in a car accident in Paris in August 1997.

The death of Diana left an indelible impact on the royal family and on her and Prince Charles’ two sons, Prince William and Prince Harry, who were just 15 and 12 years old at the time of their mother’s death. Eight years after Diana’s passing, Prince Charles finally married Camilla. Both Prince Harry and Prince William have continued to keep their mother’s memory alive by honoring her through their charity work. The young royals’ wives, Kate Middleton and Meghan Markle, also continue to pay homage to their late mother-in-law through their philanthropic efforts as well as their classic style choices.