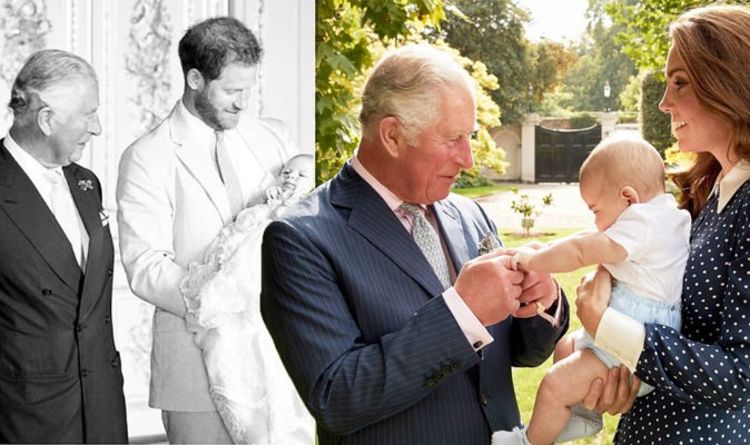 Prince Charles is the next in line to the British throne. He is also a grandfather. Today his children paid tribute to him.

What did a body language made of Prince Charles’ attitude with each of his grandchildren?

Body language expert Judi James claimed Charles in an “equally doting grandad to both” although he seemed more “tentative” with Harry and Archie.

She said of Charles’ picture with Harry and Archie: “Archie was barely seen out of Harry’s arms during the his first few months and with Harry gazing with a besotted smile at Archie’s little face in his arms, Charles’s approach looks far more tentative, as though he doesn’t want to disturb either of them.

“His face is wreathed with smiles as he looks down at Archie and the amazing similarity to the smile he wears looking at baby Louis suggests he is an equally doting grandad to both. He is more tactile with Louis here but there are reasons for that that look more down to Kate’s body language than to Charles’s.”

Kate in particular is very keen to make sure Charles and Louis are enjoying a special moment.

Judi said: “The way Kate holds (Louis) to her own torso but with his body facing his grandfather suggests she is keen to the point of determined to get Charles more involved here.

“She even studies her father-in-law’s face to watch his reaction as he plays with Louis, where Harry quite naturally looks lost in a bubble of love with his first-born.”

The expert reveals how Charles upbringing is likely to have an effect on his relationship with his grandchildren.

Alongside the post, it read: “Wishing the Prince of Wales a very happy birthday! #HappyBirthdayHRH @clarencehouse.”

The post was of two photos of Charles, with one being an incredibly touching throwback of the Prince of Wales as a baby.

Then comes Prince William’s children, George, five, Charlotte, three, and Louis, almost one, and they are followed by Prince Harry, 34. Prince Harry is succeeded by his son Archie Harrison, born in May.

ByJohnni Macke The Challenge’s Ashley Cain gave fans an update on his newborn daughter’s battle with leukemia after revealing earlier this month that she had...
Read more

By"Upon signing my new contract in 2018, I pledged my loyalty and allegiance to the club that I love, Arsenal, and it saddens me...
Read more

ByNancy Cook In a statement, Samantha Zager, deputy national press secretary for the Trump campaign, said rallies are a chance for the public “to hear...
Read more