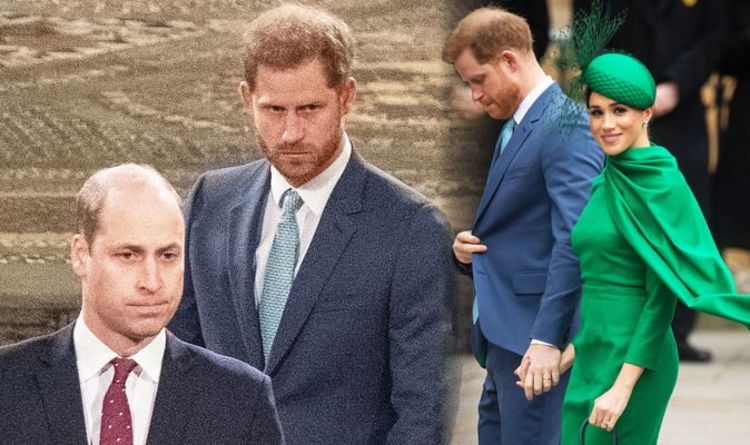 Body language expert Judi James believes there is an aspect of Meghan Markle’s character Prince Harry may be attracted to because of his brother Prince William. She claims Meghan’s drive is one of things that appeals to Harry, for one reason.

The body language expert spoke of Meghan’s first, and last, annual forum of The Royal Foundation.

The charity was initially formed by Harry and William to continue the work of their mother Princess Diana.

Kate Middleton became a patron after she married William. Meghan joined the three of them on stage to discuss the aims of the organisations.

Judi James explained: “She came straight off the blocks. Wow, she hit the ground running, it was like a CV.”

“She showed energy and commitment,” the expert added.

READ MORE: What did Harry really say to Meghan in the church? Duke whispered this to wife expert says

Meghan Markle has had an incredibly long and varied career before she met Harry, and much of it revolved around charity work.

Since 2014 she has been taking on public facing charitable roles, starting with working as a counsellor for international charity One Young World.

Since 2016 she was a global ambassador for World Vision Canada, travelling to India and Rwanda in the role.

The former-actress worked with the United Nations Entity for Gender Equality and the Empowerment of Women as an advocate.

Since her union with Prince Harry, Meghan has enjoyed even more access to the resources needed to do good for others.

She has worked since with Elephants Without Borders and the Hubb Community Kitchen, run by the survivors of Grenfell Tower fire.

Sadly, the ambition that Meghan would join The Royal Foundation was not to be. In June 2019 she and Harry announced they would start their own charity.

Judi has also analysed a picture of Meghan Markle and Prince Harry that shocked some fans of the couple on Twitter.

Another said, “He’s not Harry anymore that’s for sure,” adding a sad face to the sentiment.

Clocks go back: Do I need to change the clock on my phone this weekend?

By Sunday, October 25, sees the clocks going back an hour at 2am in the UK, restoring the time to GMT. However, the tradition is...
Read more
Lifestyle

How to clean a carpet by hand

By Ammonia will get rid of most stains if you mix about 10ml of the stuff with a teaspoon of washing powder and 500ml of...
Read more
Lifestyle

By Supermarkets including Tesco, Aldi, Lidl and Waitrose have issued a food recall notice on many of their food products including chicken, cheese and burgers....
Read more
Lifestyle

By Today is the day Apple fans have been waiting for all year. From this morning, the iPhone 12 and iPhone 12 Pro will finally...
Read more