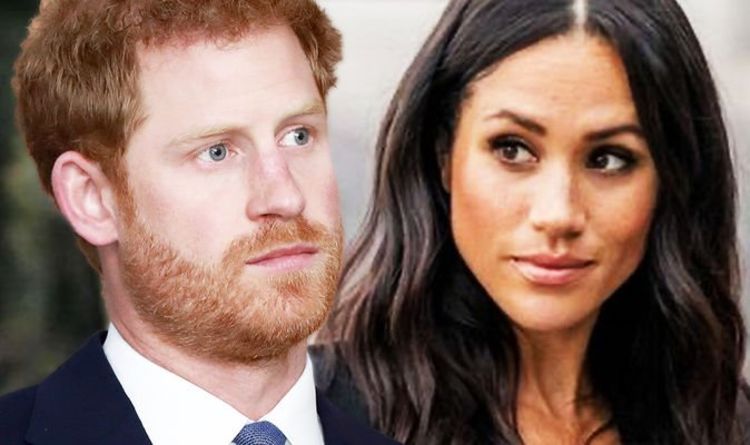 “But once you realise or you feel a little bit uncomfortable, then the onus is on you to go out and educate yourself because ignorance is no longer an excuse.”

He addressed his privileged upbringing in the Royal Family in the interview. He went on: “And unconscious bias, from my understanding, having the upbringing and the education that I had, I had no idea what it was. I had no idea it existed.

“And then, sad as it is to say, it took me many, many years to realise it, especially then living a day or a week in my wife’s shoes.”

The heartfelt interview is likely to have helped many understand bias from the Prince’s perspective, an issue he and his wife have been vocal about since they made their relationship public.

But, what did a body language expert make of Prince Harry’s behaviour during the interview?

Judi James analysed the appearance for Express.co.uk and revealed the Prince seems to be “apologetic” about his background and education.

She said: “Harry speaks about his own past in a more apologetic tone.

“Speaking of his own ‘upbringing’ his eyes go off down to his left to access recalled memory and as he does so he performs an eye-widening, brow-shrug gesture, almost as though he is now horrified by his lack of awareness back then.”

Harry was brought up mostly at Kensington Palace, the royal’s West London residence.

READ MORE: Meghan Markle shows off yet another glimpse inside £14m mansion with £550 art prints

He was educated at a number of hugely expensive private schools, including Eton College.

The Prince achieved two A-levels, with a B in art an a D in geography before taking a gap year and then entering the Royal Military Academy Sandhurst.

Harry has shown to have many of the same interests as his mother, Princess Diana, who was famously philanthropic.

During his GQ interview, the body language expert claims Harry shows his education from his late mother has now been continued by his wife.

Judi said: “It was his mother Diana who began Harry’s education of real life outside the royal bubble and it’s probably only apt that his education should now be continued by his wife Meghan Markle.”

The Prince moves through a number of phases in the interview while passionately discussing his anti-racism cause.

“He describes what sounds like his own epiphany here in terms of discovering unconscious racial bias but his body language moves through three states as he does,” Judi said.

“First we get the forgiving and empathetic Harry, telling Patrick Hutchinson that ‘No-one is blaming.’

“His palms face upward to endorse that idea of forgiveness and acceptance and when he gesticulates his hands pass across one another across the front of his torso to suggest a desire for unity.

Harry’s second non-verbal state is that of teacher or trainer.

“As he gets to the ‘but’ and says ‘…as you realise’ his right hand raises high in a finger-pinch, energetic precision gesture to show he has got the message and is keen to spread it.

“He scoops his hands towards his own chest to suggest this message is his own now and then the right hand returns to the precision gesture but in a ‘lasso’ movement to signal he’s keen to persuade as many people as possible.”