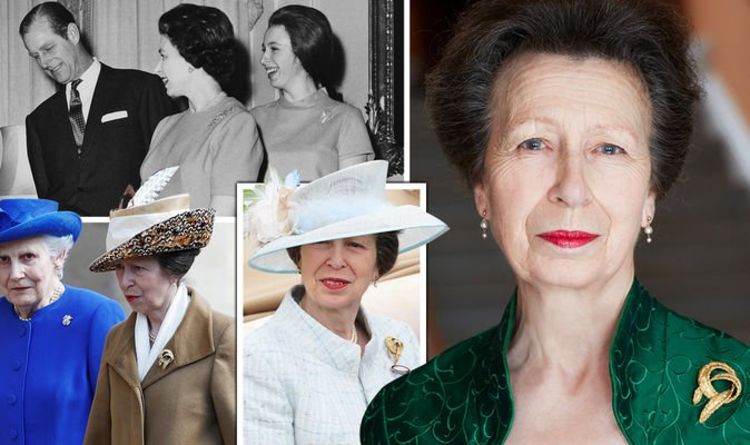 King George VI commissioned Cartier to make this tiara as an anniversary present for his wife, Queen Elizabeth, in the 1940s.

While she was photographed in it several times, it was not one of her most worn pieces, and she gave it to her granddaughter, Princess Anne, as a wedding gift in 1973.

Anne made changes to the piece at some point after receiving it. Originally, a large circular element sat at the centre, but this was replaced with a large rectangular aquamarine, and turned into a brooch. She also had the tiara shortened.

Pine cones – a symbol of fertility – make the centre motif of this diamond and aquamarine diadem.

Anne also owns the stunning Meander tiara, a piece she inherited from Prince Philip’s side of the family.

It came to the British Royal Family from Princess Alice, Prince Philip’s mother, however it is not known exactly when she herself was given it.

Because of the Greek design, it is likely to have been a wedding present – she married Prince Andrew of Greece & Denmark in 1903.

However, the earliest portraits of her in the tiara are in 1914 – the year after the death of King George I of Greece, her father-in-law – so perhaps it was came to her as part of Prince Andrew’s inheritance.

Alice was known to love the tiara, and wore it throughout her marriage, before gifting it to Princess Elizabeth when she wed Prince Philip in 1947.

However, the Queen never wore the item publicly, as shortly after her wedding she ascended to the throne – and the delicate Meander is more suited to a Princess.

Anne was given the tiara in 1972, just before her engagement to Mark Phillips. The Princess Royal had already worn the piece, attending the State Opening of Parliament in 1970 wearing it.

In modern times, the Meander is most associated with Anne’s daughter Zara Phillips, who wore it on her wedding day in 2011.