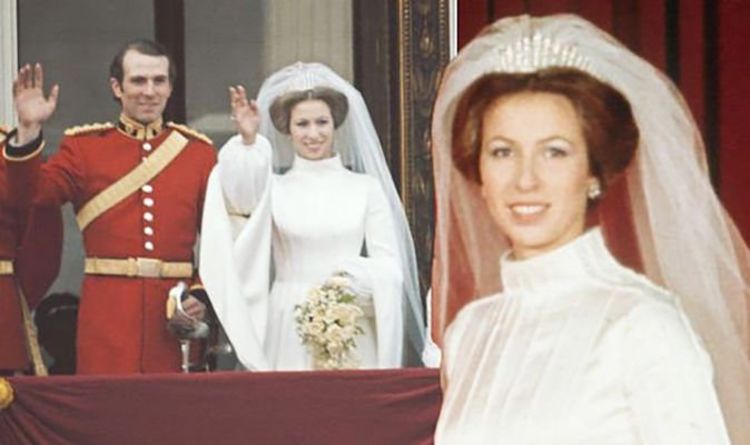 Following the tradition of royal weddings, Princess Anne completed the look with a tiara borrowed from the monarch.

She chose the lavish Queen Mary Fringe tiara which was worn by the Queen on her own wedding day.

Most recently, it was worn by Princess Beatrice when she wed Edoardo Mapelli Mozzi in a private ceremony last Friday.

When Princess Anne chose the jewel, it was steeped in royal history, according to the president of world-leading buyer of pre-owned jewellery Circas, Richard Tille.

“The famous jeweller had been asked to dismantle her necklace, the wedding present given to her (then Princess Mary) by Queen Victoria in 1893.

“This style of diamond fringe tiara had become fashionable during the Romanov imperial court, and later had become popular in the collections owned by the House of Windsor.

“Queen Mary in turn gave the tiara to her daughter-in-law Queen Elizabeth, the Queen Mother in 1936.

“She lent it to her daughter Princess Elizabeth (the current Queen) as ‘something borrowed’ at her wedding to Prince Philip in 1947.

“The Queen Mother also lent it to her granddaughter, Princess Anne, for her marriage to Captain Mark Phillips in 1973.”

The tiara has a long royal history and is seen most frequently on Queen Elizabeth II now.

The jewel is covered in diamonds and priceless, the expert suggested.

Richard continued: “It is made up of 47 diamond bars that are divided by smaller diamond spikes to mimic a Russian Kokoshnik Tiara.

“Queen Elizabeth II didn’t wear her wedding tiara regularly as it remained in her mother’s jewel collection until she died in 2002.

“She now wears it often. While many might say this piece is priceless, some royal pieces do come up for sale now and then. When they do, royal provenance can multiply the value many times.”

"I am beyond excited about SWEET because it is the first platform of its kind that is directed towards young teenage girls to help...
Read more
Lifestyle

High blood pressure: The best and worst cheese for reducing your hypertension risk

When it comes to one’s diet, careful scrutiny is advised, and for cheese lovers this means even more careful planning. High...
Read more
Lifestyle

The Duke and Duchess went on to reveal their list of BHM NextGen Trailblazers. This was a list of people who they have recognised for...
Read more
Lifestyle

M&S will, as usual, bring their best offering to the Christmas table with a plethora of classics hitting shelves in time for Christmas. The...
Read more