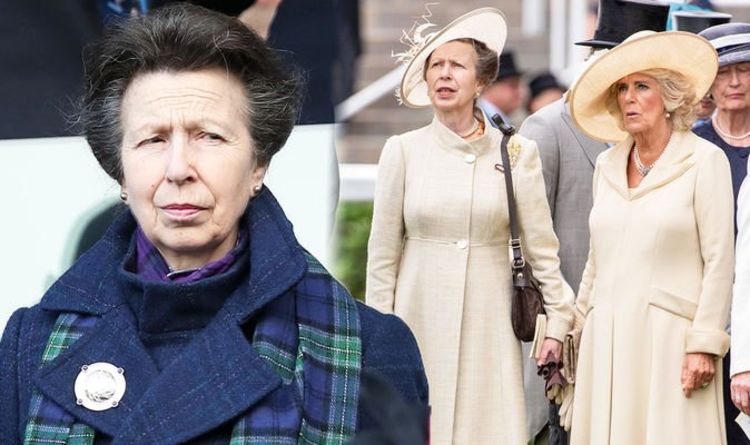 Despite dating in the past, body language expert Judi James claimed Princess Anne and Andrew still get on well.

She said: “While not exactly a ‘BOGOF’ deal, the Parker-Bowleses did provide an odd quartet-styled relationship for Charles and his sister Anne.

“Everyone knows how the Charles/Camilla romance panned out, but rather than marrying her own Parker-Bowles, Anne ended up with first Mark and then her current husband Tim.

“However her body language with Andrew does hint that, like her brother’s emotions for his wife, there are at least some enduring bonds of friendship and affection between them.”

While some will cut off their ex-partners, Princess Anne has continued to be seen out with Andrew at racing events.

“Anne looks relaxed and engaged with Andrew and his body language over the years has often worn the air of a man engaging in some gentle, flattering flirtation,” Judi continued.

“Like his ex-wife he seems to have the skills of being charming and fun and Anne responds with a good humour that is at odds with her often dour-looking facial expressions.”

Princess Anne and Camilla are also regularly spotted together as they carry out jobs in their senior royal role.

While this may not seem like a big deal to some, Judi explained it was notable among the royals.

She added: “With any other royal but Anne this might have been unimportant but the Queen’s daughter is a woman who has often appeared to keep a polite and sometimes frosty-looking distance from some of the royal wives.

“This signal of what looked like easy-going friendship and shared fun with Camilla, who can often appear tense and rather anxious in public, did seem like a first.”

BySagittarius (Nov 23/Dec 21) A colleague is starting to take it for granted that you will include some of their responsibilities in your own work...
Read more