Princess Beatrice wedding dress: Will she follow in this royal member's footsteps? 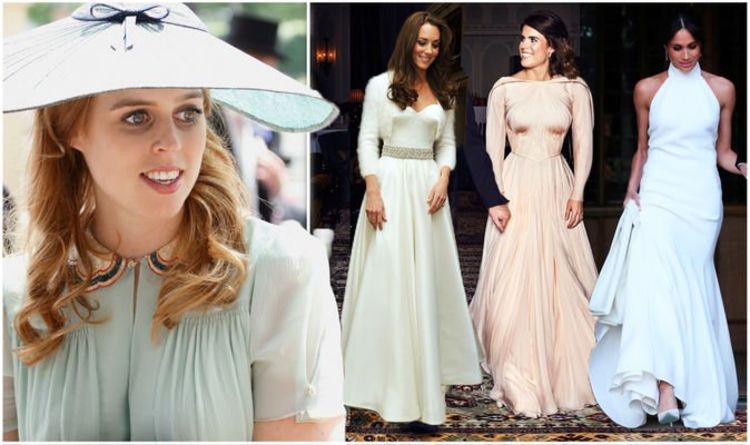 Princess Beatrice, 31, and Edoardo “Edo” Mapelli Mozzi’s, 37, royal wedding is a scant three months away, and details for the big event are starting to slowly trickle out. But one of the most-anticipated elements – the bride’s choice of gown – remains a closely-guarded secret. However, wedding style blogger and royal commentator, Hillary Hawkins, believes the Princess will follow in one royal member’s footsteps on the big day, which one?

Beatrice and Edo are set to say “I do” on Friday 29 May 2020 at The Chapel Royal, St James’s Palace before heading to Buckingham Palace, where the Queen has given them special permission to host their wedding reception.

Over the last decade, the UK has seen its fair share of royal weddings.

Although it’s a traditional aspect to keep the royal bride’s dress a secret from the general public, it has not stopped royal fans speculating what Princess Beatrice’s wedding dress will look like.

Many have suggested that Beatrice will be opting for a designer who honours her British heritage, but also has a subtle nod to her husband’s Italian heritage, so what did wedding style blogger and royal commentator, Hillary Hawkins say on the matter?

Hillary said: “Like previous royal ladies, Beatrice will most likely try to honour her own, as well as her husband’s, heritage in some type of way on her wedding day.

“Be it in the design of her dress, the choice of her flowers, or veil.

“But just like Eugenie, Meghan and Kate, Beatrice will most likely go for a British designer.”

The expert revealed that Beatrice will most likely choose a British designer for her wedding dress, but could honour her husband by following in this royal bride’s footsteps.

“However, if she chooses to follow in Meghan’s footsteps, Beatrice could honour Edo with an Italian designer for her second dress at their Buckingham reception.

“Although Beatrice has previously expressed an innate desire for a simple wedding, I believe she will still decided to wear two dresses on the day.

“During the ceremony, she will wear a gown by a British designer in a traditional ‘Princess’ style, but during the reception, I think she will take some style tips from her cousin’s wife, [Meghan Markle], and go for a sleek number like the chic Givenchy dress that Meghan wore.”

A royal watcher and commentator, writing under the name @WomenOfWindsor on Twitter, explained: “Princess Beatrice has a tiny waist and shapely legs, a column dress would highlight those two features, while a cape [dress] tones it down.

“If HRH is looking for something less traditional bridal and [less] ‘Princessey’.”

According to a report, one insider told Mail on Sunday: “Beatrice was seen popping into Caroline Castigliano in Knightsbridge.

“Although Caroline isn’t Italian, and takes her name from her first husband, she’s known as an Anglo-Italian designer because lots of her clients are from Italy.”

Hillary Hawkins commented on the choice of designer: “If reports are true, Caroline Castigliano would be a brilliant choice for the Princess.

“Caroline is a British born designer with ties to Italy so to use her as a designer would be an easy nod to Edo’s heritage.