Protesters assemble in front of New Jersey Statehouse to assail... 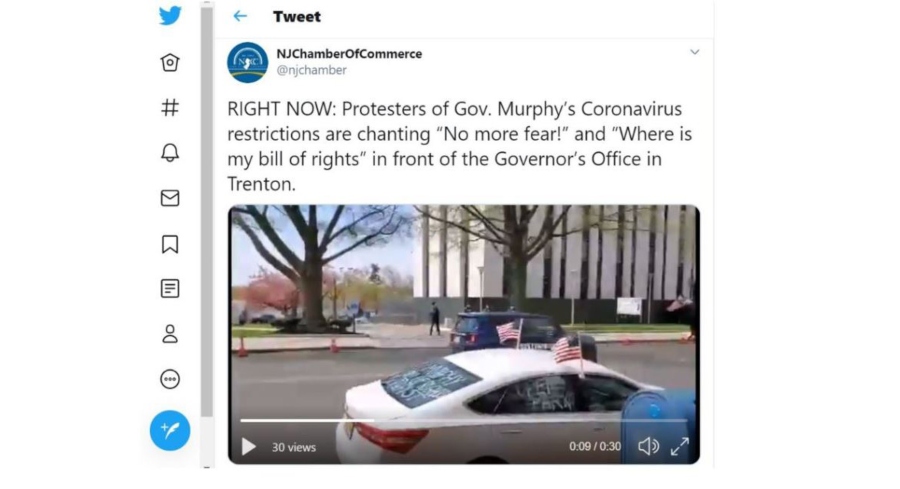 While it’s unclear how many people were attending the protest, video captured by the New Jersey Chamber of Commerce’s Twitter account shows a long line of cars honking their horns along West State Street, across from the the Statehouse and Murphy’s office. The tweet and video, which also showed people waving American flags, have since been deleted.

The words "no more fear" were audible through a megaphone as a helicopter hovered overhead and law enforcement officers blocked access to the Statehouse parking complex.

Demonstrators have also rallied in front of statehouses in Michigan, Ohio and other states to protest stay-at-home orders. Earlier on Friday, President Donald Trump issued an online call to "LIBERATE" those states where protesters have demonstrated orders issued by Democratic governors.
.
On March 21, in order to prevent the disease’s spread in New Jersey, Murphy ordered most retail businesses in the state to close and residents to stay at home until further notice. All schools in the state will remain closed until at least May 15.

While there’s strong evidence showing that social distancing has helped slow the virus’ spread through New Jersey, the effects of the disease have still been severe. More than 3,500 residents have died of coronavirus-related complications, the second-highest total of any state. There have been more than 75,000 positive cases of Covid-19 in New Jersey since the first case was recorded on March 4.

New Jersey has yet to see a peak in Covid-19 hospitalizations. As recently as last weekend, the state’s hospitals were at risk of running out of ventilators, which would have forced physicians to decide which patients would receive potentially life-saving care.

Even so, conservative media hosts and some Republican leaders have started to bristle against the continued shutdown in recent days, arguing that the damage being done to the economy outweighs the strain being placed on the health care system.

“I can no longer support Governor Murphy’s draconian shut down measures,” state Sen. Michael Doherty (R-Warren) told InsiderNJ earlier this week. “He needs to stop his one size fits all approach. He is destroying small businesses and sending millions of NJ residents into poverty.