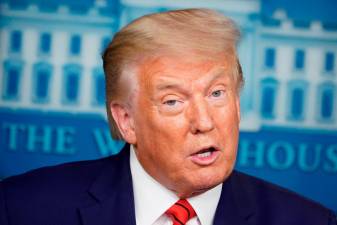 AS battle lines are drawn ahead of Donald Trump’s bid for re-election, a new documentary based on the testimony of mental health professionals has labeled the US president a “malignant narcissist.”

Unfit: The Psychology of Donald Trump– released on streaming platforms on Sept 1 –claims not to be politically motivated.

The film interviews several psychologists who argue they have a medical duty to warn the US public about Trump’s alleged mental state.

“This type of leader pops up all throughout history, and they’re always extraordinarily disruptive,“ Gartner told AFP, noting that the same label has been applied to Hitler, Stalin and Mussolini.

“What is so strange is that we’re not used to seeing this type of leader in America.”

But the film’s central premise of professionally diagnosing a public figure from afar is contentious.

Republican candidate Barry Goldwater successfully sued a magazine after it published a damning survey of psychiatrists speculating about his mental health during his failed 1964 run.

The psychiatric community later ruled that offering a professional opinion without an in-person examination is unethical.

However, Gartner argues the rise of observation-based diagnosis over traditional Freudian psychoanalysis –and the wealth of public data about Trump’s behavior – makes that rule outdated.

And the film highlights another rule that compels mental health professionals to speak out when a patient’s disorder imperils others– in this case, the US public.

“It’s not that he’s as bad as Hitler, or that he’s the equivalent of Hitler,“ Gartner says. “But he has the same diagnosis as Hitler.”

Diagnosing Trump has long been a popular tactic for his opponents.

Trump’s psychologist niece Mary Trump recently published an unflattering tome on her uncle, while the president’s own Art of the Deal

co-author has said their book should be re-titled “The Sociopath.”

The US president memorably hit back at allegations of mental health problems by declaring himself a “very stable genius.”

These include short-lived White House communications boss Anthony Scaramucci, and George Conway – whose wife, Kellyanne, recently announced she was stepping down as the president’s long-standing advisor.

According to director Dan Partland, “plenty” of politicians “have psychological diagnoses that are not dangerous.”

The film suggests Abraham Lincoln struggled with depression, which was an asset during the suffering of the Civil War, and Bill Clinton has hypomania, a key to his charisma.

“It’s the particular constellation of diagnoses that Donald Trump has that makes him so dangerous,“ Partland told AFP. – AFP