PTSD forced hero squaddie to 'hide' from planes – and... 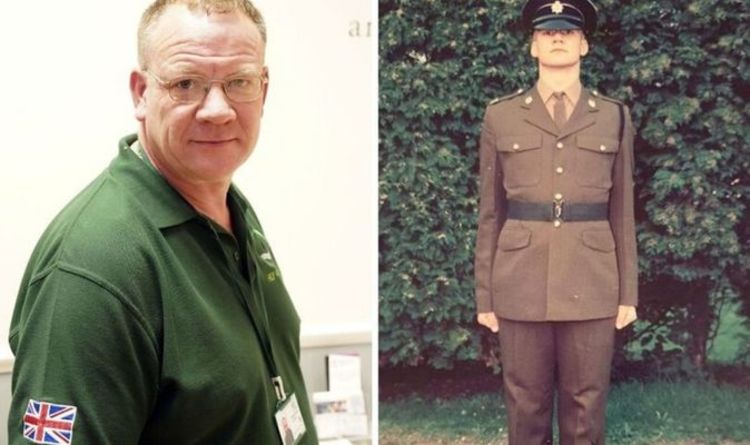 On the battlefield, Sergeant Michael Rowley was a heroic and fearless leader.

After joining the Army aged 16, he served his country for 25 years – risking his life day after day for months on end in Northern Ireland, Iraq and Afghanistan.

And despite the deaths of friends who had fought alongside him, the dad of two returned to the frontline again and again.

But, like many former servicemen, Michael faced his biggest fight miles from any warzone.

“In the late 1990s, my marriage fell apart and I was diagnosed with combat-related PTSD,” he says.

“After I couldn’t go to serve in Iraq in 2003, I started drinking heavily and gambling. I was a sergeant and should’ve been looking after my men, but I couldn’t. Every time I heard an RAF plane flying overhead, I’d run and hide.”

Michael was discharged from the Army in 2012, and then came closer to death than he had ever been in conflict. “The worst point in my life was when I took an overdose,” he reveals.

“I gave 25 years to the Army and worked alongside bomb disposal, losing nine or 10 pals in Iraq and Afghanistan. I lost my best friend in conflict and Remembrance Sunday is a huge rollercoaster ride for me.”

He credits The National Lottery-funded charity Help A Squaddie with bringing him back from the brink. It offers mental-health support to disadvantaged ex-service personnel.

It’s also helped retrain and rehouse thousands of men and women from the ex-military community who have fallen on hard times, getting them back on their feet and into work.

But none of that would be possible without funding from The National Lottery, which raises around £30million each week for good causes like this. Since the first draw in 1994, more than £40billion has been raised for arts, sports, heritage and community projects.

Help A Squaddie has received over £56,000 of National Lottery funding to provide struggling veterans with training and support.

“If it weren’t for Help A Squaddie, I wouldn’t be here today – it’s as simple as that,” explains Michael.

“It’s been like my life-support machine. The guidance they’ve given me is unbelievable. I’m no longer on medication for mental health. In fact, I now volunteer for the charity rather than rely on it.”

Michael says some charities turned him away when he needed them, but Help A Squaddie offered all the support he could have asked for.

“They helped me when I was at my lowest ebb and no one else would,” he says. “It was hard adjusting to civilian life again. But now I know I’ve got Help A Squaddie to fall back on.

“One of its volunteers, Adele Fessey, will always have a special place in my heart. If it wasn’t for her I would have died that day [of the overdose], I’d taken so many tablets. She saved my life.

“I’ve turned things around since then. I have a new partner and have set up my own gardening business. I’m loving life now.”

Michael, now 48, says the charity has also opened the door to let him support more veterans.

“I’ve been given training to help people with mental health issues,” he explains. “And I’m always there with a cup of tea or coffee and a listening ear for whoever needs it.”

Help A Squaddie’s volunteers are also on hand to give advice on things like filling in forms and other paperwork that ex-service people might need to deal with, and the help they offer is crucial.

“Volunteering’s my way of giving something back to the people who supported me,” says Michael.

“Every year, they help 300 to 400 veterans, and it’s open to all three services. It’s hard to believe where I was two years ago and where I am now.”

Every penny the charity receives is vital, adds Michael. “The £56,000 of National Lottery funding has helped to save lives and will continue to do so. It’s that simple.”