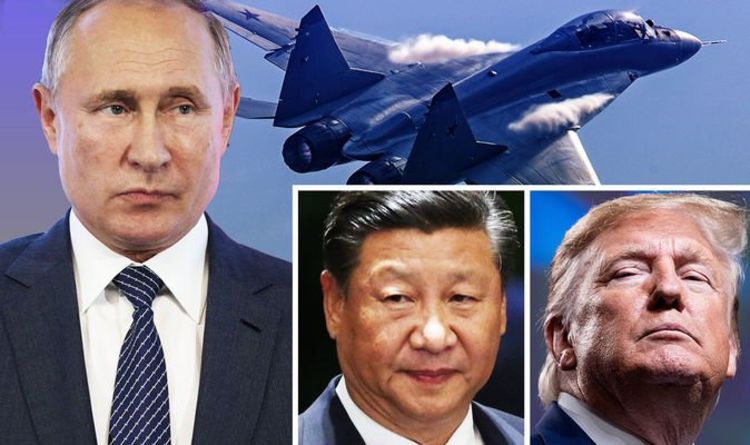 More than 40 African leaders arrived in Sochi this week to an array of weaponry, with an Mi-35P attack helicopter on display attracting the interest of Nigerian President Muhammadu Buhari who purchased 12 following the summit. The Kremlin’s aerial arsenal also included an MiG-35 fighter, and for ground combat Moscow flaunted its Typhoon armoured car, T-90 battle tank and stands brimming with AK-15 assault rifles. This came after Russia sent two Topulev TU-160 nuclear bombers to South Africa, the largest military aircraft in the world and capable of firing nuclear missiles.

Putin has seen Russia become Africa’s largest weapons supplier, with orders of nearly £11billion’s worth of arms making its way to the continent.

Africa has previously been a hotbed for investment from China, with President Xi Jinping investing hundreds of billions of pounds into infrastructure, transport and other projects as Beijing continues to extend its influence throughout the globe.

This all comes at the expense of the US, with President Trump cutting back Washington’s military presence and offering little time for political engagement with African leaders.

Trump’s passive policy has already cost Washington in the Middle East, where the withdrawal of US troops from Syria has not only lead to a violent Turkish incursion, but has essentially seen Putin seize control of the region.

The US President may not see Africa as a priority, but he may have underestimated the opportunities in the continent and how they will benefit his political rival Putin.

Africa has diamonds, minerals and oil in abundance in various areas of the continent, and represents a potential economic opportunity free of Western sanctions that have thwarted Russia following its controversial annexation of Crimea in 2014.

READ MORE: Trump attacks EU as he lashes out at Europe’s role in ISIS fight

The Russian President seems to be reviving old alliances from the Cold War, when the US, Apartheid South Africa and China tried to prevent the spread of communism in the global south, including southern Africa, while Soviet allies sought to make the region one of many breeding grounds for the ideology.

The Kremlin could be making strides to reviving the legacy of the Soviet Union, all while China contest and Trump sits idly by.

ByPresident Trump called into an event held by Pennsylvania Republicans on Wednesday, where he reiterated his claim that he won the Nov. 3 election and reasserted claims...
Read more

ByMr Biden, who is due to replace Donald Trump in the White House in January next year, has repeatedly warned Britain not to allow...
Read more