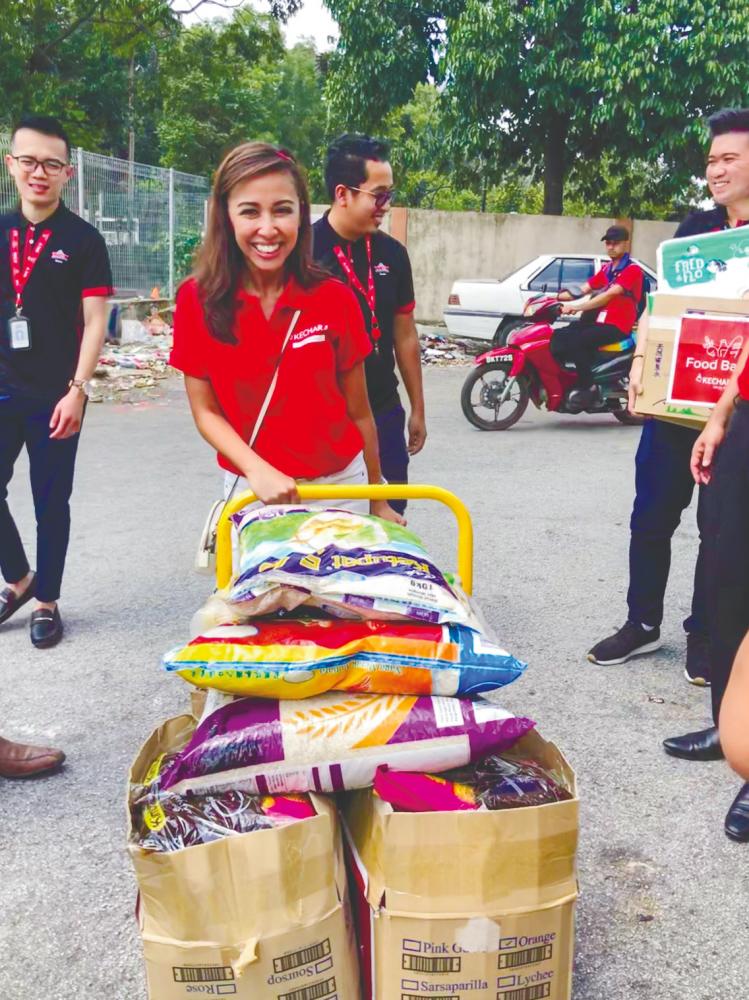 AS most Malaysians found themselves stranded at home – either working or otherwise – others in more critical roles were at the frontlines of the Covid-19 pandemic, such as YAM Tengku Zatashah Sultan Sharafuddin Idris Shah, who worked with Kechara Soup Kitchen to get essential items to those affected by the movement control order (MCO).

“I have been working behind the scenes to get the approval for (Kechara) to continue with the food distribution and delivery to the homeless and the poor,” she revealed.

No stranger to fighting and advocation for social and environmental causes, Tengku Zatashah has been involved with Kechara as a regular volunteer since 2015, and in 2016 she kickstarted the #zerofoodwastage campaign.

The campaign’s intention was to save surplus food from hotels and supermarkets to then be distributed to the needy, homeless and urban poor.

“To date we have saved over 1,000 tonnes of surplus food for the needy. Every year during the month of Ramadan I write to the various hotels in KL and Selangor, and they immediately agree to be our partners in #zerofoodwastage as we pick up the surplus food from the hotel buffets and immediately deliver them to the homeless and urban poor families.”

Last Ramadan was a milestone for the movement, as they recorded 11 tonnes of surplus food that was saved and redistributed.

Tengku Zatashah further supports Kechara in other ways by doing regular food distributions to the homeless on the streets, especially during holiday periods such as Hari Raya, Chinese New Year and New Year’s Eve, as this is when there are fewer volunteers, and so further help is needed.

During the MCO, Tengku Zatashah continued her support for Kechara while still adhering to the rules of the nationwide quarantine.

“The approval for the food distribution and delivery for the poor and homeless was from the Federal Trade Ministry and the letter of approval came from Yayasan Food Bank Malaysia, of which I am a member of the board of trustees,” said Tengku Zatashah.

“I have also been linking up corporations with Kechara for help, such as Touch n Go.

“The MCO is absolutely necessary for safety, and as we always say, safety comes first. As such, Kechara distributes masks, gloves and sanitisers. The core team of regular volunteers are also temperature checked.

“Social distancing is easily enforced thanks to RELA volunteers, with clear instructions for the beneficiaries to maintain at least two metres between each other.

“Additionally, we can now continue to deliver and distribute food supplies to the urban poor in the PPR flats.”

Since the eighth day of the MCO, the Kechara Soup Kitchen programme has given out 2,459 meal sets, the Kechara Food Bank has rescued nine tonnes of surplus food and the number of people benefitting from its services during the restictions comprised 1,377 individuals; 743 homeless, 164 from the urban poor and 470 underprivileged individuals from shelter homes.

As Tengku Zatashah toils continuously to aid Kechara in its social endeavour during a time of national crisis, the Royal Princess of Selangor hopes that those at home will lend their support through donations.

“All proceeds are credited directly to Kechara Soup Kitchen. It is so easy, and I have already made my donation!” she said.

“And if you don’t have the Touch ‘n Go eWallet, you can simply donate directly, as we urgently need funds and food donations in order to prepare food boxes.”