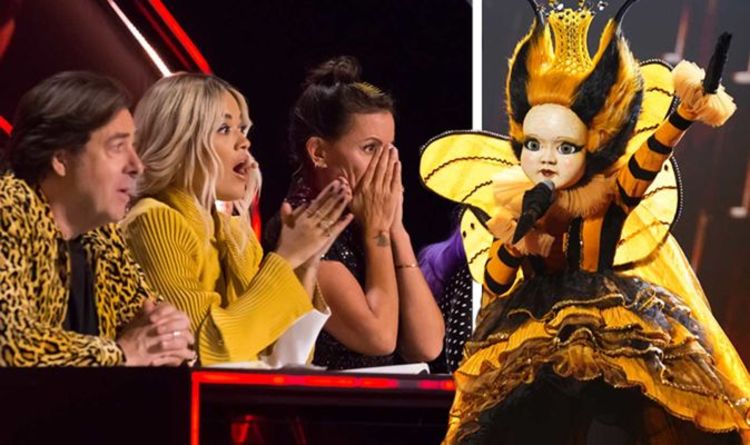 The Masked Singer fans were sent into overdrive last weekend when Queen Bee took to the stage once more and performed. After wowing the judges and studio audience she made it through to week seven and tonight, ahead of the semi-final, it seems a ‘slip-up’ made by the celebrity underneath the mask has revealed her identity.

Tonight, five famous faces, hidden underneath elaborate costumes will showcase their singing talent in from of Ken Jeong, Davina McCall, Rita Ora and Jonathan Ross, who are then tasked with trying to uncover their identities.

Speculation has been rife as to who is Queen Bee, with Girls Aloud band member Nicola Roberts a firm favourite.

But it seems, the clues are pointing towards Little Mix’s Jade Thirlwalll, especially after a ‘slip-up’ was made during her performance last weekend.

Taking a look back at the very first clues which were dropped by the ITV competition, before singing Sia’s Alive, Queen Bee said she was a “wild card” and “rule breaker” and was “quite young” when her career began, but now they’ve “grown up”. “I’m no longer a princess,” she said. “I’m a queen.

READ MORE: Masked Singer revealed: Is THIS who is behind Fox’s mask?

Queen Bee also revealed: “Out of all of my friends, I am the joker of the pack.”

Her second song choice was Lewis Capaldi’s Someone You Love, and she revealed how she was a “lawmaker” with a background in activism.

““People might think I’m shy but I’m not afraid to stand up and fight for what I believe in,” she said.

“I’ve always done that and it makes me proud to say sometimes I’ve made a real change.”

“Am I a law breaker? No, I’m a law maker. I’m a benevolent Queen and bees only sting when they have to. But don’t let that fool you, this bee can sting,” viewers were told.

The two truths and one line were: I’m under 30, I’m well known in the fashion circles, I’m not known for singing onstage.

Well the first two are relatable to Jade Thirwall, while the latter could be the lie.

In week four of the show, Queen Bee returned to the stage and said she had “won a contest” which “launched her career,” this could easily be suggesting the X Factor.

“I was so young I felt like I was being swept along with the tide and I’d been thrown in at the deep end,” her VT explained.

But it was the following clue which suggested she was part of the Little Mix band: “With tonight’s song I’m going to enjoy every moment – these wings were made to fly,” in reference to one of their number one hits.

Week five saw Queen Bee explain how having a “public image can be difficult” as “everyone has an opinion and it’s not always complimentary”.

She shared: “I do silly things to try and change my appearance. Now I’m smarter and wiser, I can laugh it off.”

But it was the last remark which fans think sealed her identity, Queen Bee said the words “woman like me” which is another Little Mix song.

Many took to Twitter to discuss the possible identities, one said: “I’m started thinking that Queenbee under the mask is Jade/ Leigh-Anne from Little Mix. The last episode of masked singer gave us a huge clues. Also we got to know she’s young pop star and in this video queenbee says ”woman like me now has the power”. @LittleMix #TheMaskedSingeruk”