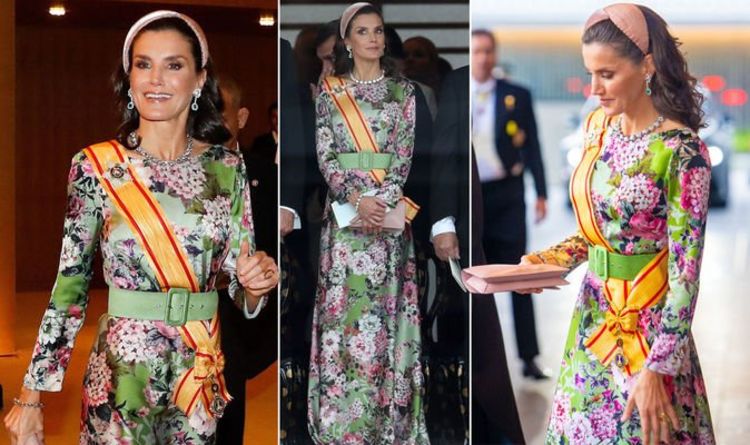 Queen Letizia, 47, joined her husband King Felipe, 51, at the event – where they met with many other royals from around the world. Letizia made sure to fully represent Spain during her visit, wearing an eye-catching floral dress by Spanish designer Matilde Cano. The full length printed dress, which comes with a green silk belt, is available to pre-order now and costs £292 (€339). However, the stunning design was not the most noted part of Letizia’s look, and instead a fashion-forward headband caught attention.

The dusky pink wide band is from another Spanish designer, Nana Golmar. Fans can buy or rent her pieces, with a similar version to Letizia’s available to rent for €155 (£133.50).

Headbands are all the rage among fashion-conscious women at the moment, and one British royal in particular has been spotted in one at numerous events.

Kate Middleton, the Duchess of Cambridge, is known to be a fan of the style, and it seems Letizia has admired Kate’s style from a distance and decided to try the look out for herself.

For the rest of her outfit today, Letizia held a rose pink clutch by CH Carlina Herrera in her hand.

She also wore royal jewellery that she has not been seen in before – a necklace, as well as earrings and bracelet.

The necklace was created by Queen Victoria Eugenia, a grandchild of Queen Victoria, from diamonds she was given by her husband King Alfonso XII.

Each time he gave her a diamond, she would add to the necklace – leading to it getting so long that she could loop it twice round her neck, and it still came down to her waist.

In more recent times, the necklace was divided in to two – the longest of which went to King Juan Carlos as part of his inheritance. The other was bought back by the royals at an auction in the 80s.

It is the shorter version that Letizia wore today, pairing it with diamond earrings finished with emeralds, which belong to Queen Sofia.

She has worn these before – to a gala in 2007 and a state visit to Portugal in 2016. They come with a matching choker, but Letizia opted to mix and match this time with the aforementioned necklace.