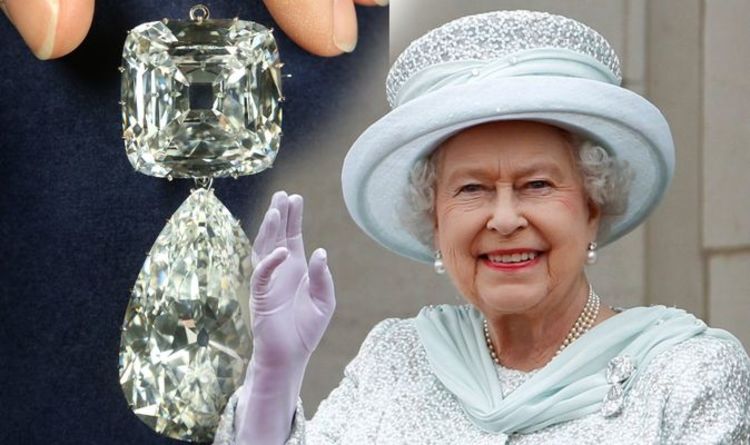 Expert Alexandra Michell, Gemologist Prestige Pawnbrokers of Channel 4’s Posh Pawn told Express.co.uk all about this fascinating gem and how it came to the British Royal Family.

She said: “In 1905, Frederick Wells, surface manager of Premier Mines in South Africa, discovered the largest gem quality diamond in history; The Cullinan. Weighing a staggering 3106cts, this incredible rough diamond is said to only be a portion of a much larger diamond, although it has yet to be discovered.

“It was presented a few hours later to the mines’ owner, Sir Thomas Cullinan.

“The sale of the stone was negotiated and purchased by the Transvaal Government at £150,000 in 1907 (now roughly £18,000,000) with a view of gifting it to King Edward VII as a birthday present, as well as a gesture of loyalty to Great Britain.”

The story of how the stone reached British shores involves a plot full of intrigue.

The expert went on: “The stone had to be shipped over to England, and a ploy was concocted to ship a decoy stone aboard a steamer to London, locked up in the captain’s safe, accompanied by a security squad, all the while, the real diamond had simply been posted in a plain box!”

The stone was cut by none other than the so-called “Greatest Cleaver in the World” Joseph Asscher, who designed the famous Joseph Asscher cut.

Alexandra explained: “Cutting the gem was entrusted to Joseph Asscher, who, before any blades touched the stone, spent six months examining it.

“It then took four days to make an initial groove, and When Asscher finally took the plunge, his blade broke. When he tried the second time, after cleaving the stone perfectly, he fainted!

“All in all, it took eight months for Asscher to complete the process, and the gem yielded 105 stones, including 9 of the most important diamonds.

“King Edward kept Cullinan I and II, while one part of the parcel was given to Asscher as a fee, and another part was bought by the People of South Africa, and eventually gifted back to the British Royal Family.”

The pieces which make up the Queen’s famous brooch are the Cullinan III and Cullinan IV.

“Both stones are described as colourless, and are thought to be a rare Type IIa grade, as well as being exceptionally clean stones, despite their size.

“The stones became part of Queen Mary’s Royal jewellery box in 1910 and were originally set in her crown for her Coronation of 1911. Cullinan III was set atop the crown, while Cullinan IV was set on the band of the crown. It is said that the stones made their way into other jewellery before finding a home in a two stone pendant-brooch later in 1911.

“The brooch was then inherited by Queen Elizabeth II in 1953.”

Despite the gems having enormous wealth, they became known by a nickname which does little to belay their huge wealth.

The Queen refers to the enormous diamonds as “Granny’s Chips”.

“If both stones were to be valued in the usual way, their worth would be over £16 million, almost the same price as the original rough of 3106cts! But given they had been cut and polished by one of the greatest jewellers and are a regular piece in the Royal Family’s rotating collection, I would estimate this incredible brooch to fetch £35 million to £50 million should it ever sell through auction.”

Another stunning piece of jewellery in the Royal Family is the Queen’s engagement ring.

This piece is not an heirloom in the sense that Her Majesty inherited it, as Prince Philip designed the gorgeous piece for her.

The ring is a platinum ring set with eleven diamonds, a 3 carat round solitaire and five smaller stones set on each shoulder.

When it comes to combating the dreaded hair loss condition, tea tree essential oil could be one of the most inexpensive and natural ways to help stimulate hair growth....
Read more
Lifestyle

This extra time has seen 58 percent develop a new-found fondness for their bricks and mortar and its contents. And 24 percent went as...
Read more
Lifestyle

It is available in extra small, small, medium and large but they are already beginning to sell fast with only a few more pieces...
Read more
Lifestyle

Princess Margaret has been iconic since her teenage years, known for her wit, her appetite for a party and her beauty. She was a larger-than-life...
Read more
Lifestyle

Musician in relationship with 'African Kim Kardashian' to run for president

staronline@reachplc.com (Joshua Smith) Diminutive musician Grand P has revealed that he plans to run for president of his home country Guinea and that his plus-size...
Read more