Rafael Nadal out of Italian Open as 'magical' Diego Schwartzman... 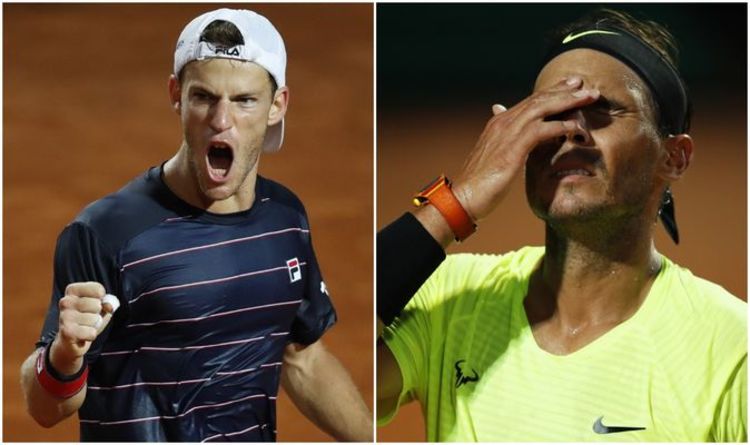 Diego Schwartzman hailed what he felt was his “best tennis ever” while Greg Rusedski labelled him “magical” after he dumped reigning champion Rafael Nadal out of the Italian Open at the quarter-final stage late on Saturday night. The Argentine won 6-2, 7-5 against the ‘King of Clay’ himself.

Schwartzman’s win prevents the possibility of a blockbuster showdown between Nadal and Novak Djokovic in the final in Rome.

In the process, the 28-year-old, ranked 15th in the world, claimed the first top five win of his career and his first ever triumph against Nadal.

He had previously lost nine times in a row against the Spaniard with Nadal usually an unstoppable force on the clay.

But Schwartzman had too much for the 19-time Grand Slam champion on this occasion.

His reward is a showdown with 12th seed Denis Shapovalov as he looks to earn a spot in the final, potentially against Djokovic.

Schwartzman said: “It was crazy. Tennis is crazy. The last three weeks were really bad for me, I was thinking to Hamburg and to take rhythm.

“The first round, I was not playing very well. Today I played my best tennis ever, similar to Roland Garros against Rafa three years ago.

“I was not thinking to beat him because I was not playing good. Today I did my best and I’m very happy. It was different without people, I prefer with people these kind of matches, my first time beating him, but it was okay.

“I played against him nine times before, I think four or five times, I was not close but playing really well and close in the score, feeling well.