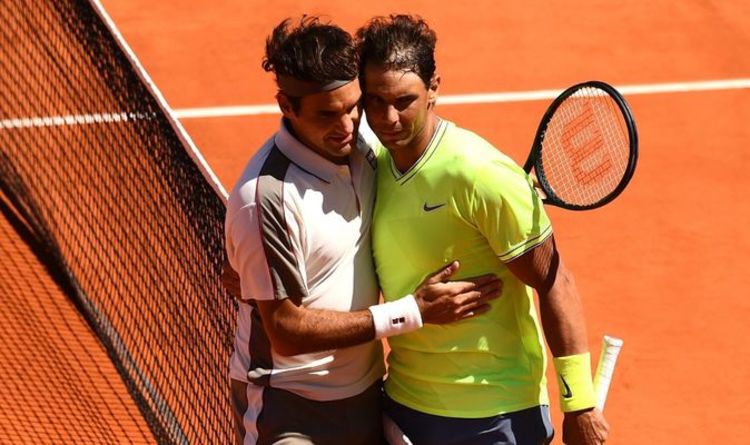 Rafael Nadal insists he won’t ‘go crazy’ trying to beat Roger Federer’s record for Grand Slams. Federer currently sits top of the all-time list with 20 with Nadal on 19 and Novak Djokovic breathing down their necks on 17.

Ordinarily, at this time, Nadal would be at Wimbledon trying to win a third title at Sw19.

But the coronavirus pandemic put paid to those hopes.

Instead, Nadal is currently at home in Majorca, gearing up for the resumption of the tennis season next month.

The Spaniard’s schedule is yet to be confirmed but it appears likely he will skip the US Open and instead prepare for the French Open, which has been rescheduled for late September.

JUST IN: Could Roger Federer follow his idol Michael Jordan and turn 2021 into his own ‘Last Dance’

And given his phenomenal record on clay, Nadal remains the heavy favourite to win a remarkable 13th title at Roland Garros, which would put him level with Federer.

But speaking in an interview with the BBC, Nadal says that while he wants to win as many majors as possible, he will be content if it doesn’t happen.

He said: “I’m super happy with how my career has evolved [but] I can’t go crazy thinking about 20 or if Novak is winning.

“Obviously he is always going to be the favourite on clay so that’s where he is looking at. And at the end of the road, if he gets to 21, he will get to 21.”

Meanwhile, British star Heather Watson has been opening up on not playing at Wimbledon this year due to Covid-19.

She said: “As a British player playing at Wimbledon, you just live for that summer grass-court season and Wimbledon is the big finale.

“I think what I’ll miss most is just playing, being out there on court in front of that home crowd, that winning feeling.”